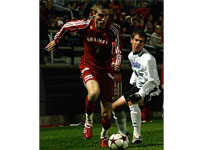 It was cold. It was wet. It was raining. What a great day for Homecoming soccer.
The Braves faced off against the Drake Bulldogs on Saturday for Bradley’s annual homecoming game.
The Bulldogs (5-3-1) struck first and struck fast. In the 8th minute of the contest, Bulldog Luke Gorczyca scored a goal off a free kick by Kevin Shrout to give Drake the early 1-0 lead.
The Bulldogs didn’t stop there. Michael Noonan received, pass from Shrout and fired a shot into the top right corner of the goal through the hands of Braves senior goalie, Drew Van Kampen. This gave Drake a 2-0 lead within the first 11 minutes of the game.
In the 20th minute, Hunter Kennedy got his first point of the year with a touch goal while in front of the open net. This gave the Bulldogs an early 3-0 lead early in the first half.
“It’s tough,” said coach Jim DeRose. “Luckily, they got the lead early enough that we still had time to come back. We just couldn’t convert on chances.”
The Braves came back, getting a goal from senior forward Chris Cutshaw off a penalty kick in the 45th minute of the first half. The penalty kick came after Calvin Clark of the Bulldogs received a yellow card for a hard tackle in the Bradley box.
This would be all the scoring for the matchup as there were no goals in the second half, leaving the final score as Drake three, Bradley one.
The Braves outshot the bulldogs 18-15 in the game, including having one more shot than them in the first half.
“They capitalized on three restart opportunities in quick succession,” Cutshaw said. “We out shot them and had a lot of the play, but they put their chances away. That is soccer.”
With Cutshaw’s penalty goal in the first half he moved into a third -place tie for Bradley’s career goal-scoring list with 31.
“It feels amazing to be recognized alongside some of the names on the career goal-scoring list,” Cutshaw said. “I am very humbled by the accolades I have achieved throughout my career, because I know the reason is that I have played with some great players. But, my main concern right now is helping the team achieve great things this season.”
The Braves look to rebound after dropping six consecutive Missouri Valley Conference games dating back to last season.
“We need to work on the little things,” DeRose said. “Soccer, like football, is a game of special teams. In two games we have given up all goals, given up on set pieces free kicks/corner kicks. The problem has been attention to detail on those plays.”
The Braves look to get back on track when they face off against Missouri State on Saturday at Shea Stadium.
“We could still potentially win the league, and that is the way we have to approach it,” Cutshaw said. “We played the top two teams in the league and allowed four goals on restarts. We are doing things to correct this problem, and a good result this weekend will put us back where we want to be.”
More from SportsMore posts in Sports »