Soccer exhibits strong offense and defense in a 4-0 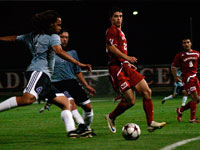 The Braves started MVC play with a 1-0 loss to Creighton. The lone goal of the game came off a header on a corner kick in the 41st minute.
The Braves faced off against the Central Arkansas Bears (2-5-1) in a game last Friday, and aimed to get them back on track after a tough weekend in Dallas at the SMU Invitational.
The team did just that, beating the Bears 4-0 in an offensive slugfest. The Braves outshot Central Arkansas 12 to two in the first half alone.
For the whole game, Bradley outshot the opponent 24 shots to eight.
“It was good to get back on the field and get a good result,” said coach Jim DeRose. “We got four goals from four different players and we didn’t give up a goal. Youalways feel better after getting that kind of a result.”
The Braves got their only goal of the first half in the 14th minute when senior Chris Cutshaw passed to senior Grant Campbell who fired it to the back of the net.
Injuries plagued both sides of the field during the first half, as several players from each team went down.
In the second half, Bradley picked up right where it left off. The Braves dominated, keeping offensive control for a majority of the game. Their second goal of the game came in the 68th minute when freshman Jochen Graf fired one in after senior Justin Bigelow centered the ball in front of the net. The goal was the first goal for Graf in his collegiate career, and he added an assist later in the game.
“It was really a great feeling,” he said. “We had to get back on track after theweekend in Dallas and I was really excited to get that goal and help usdo that.”
The Braves next goal came in the 88th minute when Cutshaw received a pass from sophomore Rudy Garcia and put it in past the Bears’ goalkeeper, Patxi Shortsleeve.
Cutshaw started the week ranked 15th in the nation with 15 points on seven goals and an assist. He added to this total having one goal and one assist in this game. Graf also had one goal and one assist.
“We were obviously very disappointed with the way everything went in Dallas,” Graf said.“ But we came back last week with a good mentality and I think we showed goodcharacter by coming out and taking care of business at home.”
Sophomore Christian Meza added a nail in the Bears’ coffin when he scored the Braves fourth goal, in the 90th minute of the game, for his second goal of the season.
“We were excited to get back and play again,” DeRose said. “Obviouslyto be able to score four goals and have a shutout is a good result forus. And being our last non-conference game, but obviously the next 10conference games will determine our season.”
The Braves open conference play on Wednesday, facing off against Creighton.
More from SportsMore posts in Sports »