Soccer finishes its season with a loss against Evansville 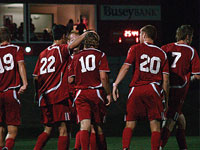 After a rough season, coach Jim DeRose said his team is humbled.

“This was an abnormal season for the program,” the soccer coach said. “We are usually playing almost to Thanksgiving, and this year we are done much earlier.”

Last season the Braves qualified for the MVC Championship after finishing 6-12-2 (1-4-0).

The Purple Ace’s Tom Irvin struck first in the 24th minute on a 22-yard shot off of the pass from Reggie Edu.

Toward the end of the first half, Evansville player Robby Lynch scored what would be the game winning goal off a corner kick. Blake Schneider and Richard Menjvar assisted the goal.

The lone Braves goal came late in the second half when senior Chris Cutshaw put the ball in the back of the net just over the keeper from 18 yards out.

The goal was Cutshaw’s 10th goal of the year. He is the first player to score double-digit goal since Preston Good accomplished the same feat in 2003.

Coach DeRose has been very impressed by Cutshaw’s performance this year.

“Chris came into the season as a highly regarded soccer player on many pro boards,” DeRose said. “He showed he’s a next level player. I will be surprised if he doesn’t play professional soccer.”

This season Cutshaw had many personal achievements. He has had the most points scored in a regular season game this season with six points from the game on Sept. 6 against Mercer. He was also the only player to achieve hat trick in the MVC.

While this season is over much earlier than it has been in past years, the Braves have a young core of players who will be return to the program.

The team has already started preparing for next year. DeRose said some of the players have already been playing in the indoor facility and hitting the weight room hard.

“They are starting right away,” DeRose said. “The seniors had a great chat with the underclassmen. The seniors stressed working the team out of the slump is to show up to the weight room and take offseason seriously.”

The Braves will try to bounce back and have a better year next season, even though they will be losing top players among them Cutshaw, Graham Stockdale, Travis English, Drew Van Kampen, Grant Campbell and Justin Bigelow.

The 2009 State Farm MVS men’s soccer tournament will be held this weekend and hosted by Drake University.