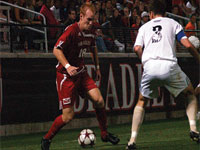 Last weekend the Braves hosted the Hotels at Grand Prairie Bradley Soccer Classic at Shea Stadium.
In the Braves’ first contest, they faced off against Western Michigan (0-4-0) in a physical contest. A total of five yellow cards were given out, all to Western Michigan players.
In the 25th minute of the contest, Grant Campbell got his first goal of the season, firing a shot past the Western Michigan goaltender off a pass from senior Chris Cutshaw, putting the Braves on top one nothing early in the game.
The Braves dominated ball control and were on offense for a majority for the first half. The Braves outshot Western Michigan 19-5 in the first half.
In the 52nd minute of the game, the Broncos came back and tied up the game with a goal by Sam Meyer. This happened after there was a cluster of players in front of the Bradley goal.
The Braves came back and took the lead with about 12 minutes left to play when sophomore Jochen Graf passed to sophomore Christian Meza who fired a goal in the upper right hand corner of the net to put the Braves up 2-1. This ended up being the final for game one.
With less than a minute in the game there was a bit of a shoving match after a hard tackle by Ko Yamamoto on Bradley’s sophomore defender Bryan Gaul. Both teams got involved in some shouting and shoving but no punches were thrown and eventually order was restored with no cards being handed out.
Bradley’s last game of the tournament squared off against Xavier (0-3-0). Bradley scored first with a goal in the 21st minute from Gaul off a free kick by Tapiwa Machingauta. The goal was his first of the season.
Bradley would later score again on a goal by Cutshaw in the 83rd minute making the final score 2-0 Braves. It was Cutshaw’s sixth goal of the season. Cutshaw has contribed offsenviely in every game thus far.
The Braves 5-0-1 start is the best starting record for the team since the start of the 2002 season.
“Our success this year can be attributed to a strong senior class that is showing our younger guys how to play the Bradley way and how to win,” Cutshaw said. “We have a very organized and strong backline and we are finishing most of our chances on the attacking side of the ball. We need to be tested by better teams to determine how successful this team can be. I think we are up for the challenge and this next weekend will give us a good indicator of where we are.”
The Braves were recognized by the CollegeSoccerNews.com Top 30 National Poll for the week of Sept. 8.
They are now ranked as the 28th best soccer team in the country.
“It is a bittersweet thing to be in the national rankings early in the year,” Cutshaw said. “It means obviously that your team is playing pretty well and that the nation is recognizing your talents. However, it also puts a big target on your back.”
Bradley has been in the national rankings for the 10th time in coach Jim DeRose’s 14 years coaching at Bradley.
“The national rankings obviously are about playing well and getting results, so we’re excited to be recognized and this is a place we aspire to be year in and year out,” DeRose said.
Gaul was named as the Missouri Valley Conference Player of the Week. Gaul is the second leading score on the Braves this season behind Cutshaw. His award comes one week after Cutshaw was awarded the MVC Offensive player of the week.
“Bryan Gaul’s move from the midfield to the defense has allowed us to be a more comprehensive defensive team, but also allows us to initiate the attack from both Bryan’s and Travis English’s outside back positions,” DeRose said.
This weekend the Braves play in the SMU invitation in Dallas. The will be playing both SMU and Tulsa Friday and Sunday respectively.
More from SportsMore posts in Sports »