Soccer shut out, falls to No. 2 Creighton 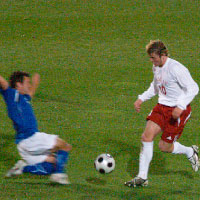 A recruit who got away turned out to be the difference in the soccer team’s 2-0 loss to No. 2 Creighton on Saturday at Shea Stadium.
Freshman Nick O’Neil, who graduated from Peoria Notre Dame High School, pushed across his first career goal with fewer than five minutes remaining in the first half to give Creighton the lead at the break.
“He is a very, very good player,” coach Jim DeRose said. “He’s coming behind some forwards that are juniors and seniors, and I’m sure he’s going to have a very good career.”
DeRose recruited O’Neil but without much luck as O’Neil’s mom is a Creighton alumna.
The loss ended Bradley’s (6-7-1, 1-2-0 MVC) Missouri Valley Conference 10-game regular season unbeaten streak.
The Bluejay’s (10-1-2, 2-0-1 MVC) second goal came off the foot of senior Andrei Gotsmanov who started the season on the Missouri Athletic Club Hermann Trophy Preseason Watch List, the Heisman trophy of college soccer.
Although the Braves didn’t come away with a win, they gained some valuable experience from the match-up.
“Obviously with five freshmen starting I thought they did a good job,” DeRose said. “They’ve learned a lot about the rivalry.”
The intensity of the match was apparent, with 29 fouls and seven cards given out throughout the game.
Junior Grant Campbell received a red card at the 59:09-mark, forcing the Braves to play a man down for the rest of the game.
“In order for a rivalry to be a rivalry, you have to have wins and losses from both teams,” DeRose said.
Creighton owns a 19-5-1 advantage in the all-time series, but the two teams have split 2-2-1 over their last five games.
The Braves were outshot 14-5 in the game, and they did record a single shot on goal.
Freshman Bryan Gaul led Bradley in shot attempts with three.
The Bluejays recorded their ninth shutout of the season with the win.
The loss drops Bradley’s home record to 2-4-1 on the season.
Creighton coach Bob Warming said he understands why it is tough for the Braves to pick up wins at home.
“Our guys were very excited to come here and play,” he said. “As soon as we saw the field and how beautiful it was, our guys were really excited.”
Defense prevailed in the first half, as neither team was able to score a goal in the first 40 minutes.
The Bluejays had some chances late in the period.
Creighton had a shot go just wide of the net and a header fall right into the hands of Bradley sophomore goalkeeper Drew Van Kampen before O’Neil finally scored the goal.
The Bluejays scored an insurance goal late in the second half putting the game out of reach.
“We just wanted to be in a position [to win] with five minutes left,” DeRose said. “But we just couldn’t get it after that second goal.”
The Braves fell to Drake (11-3-0, 3-0 MVC) on Wednesday losing the game 4-1.
Cutshaw scored his ninth goal of the season on a penalty kick, but it wasn’t enough to win the match for the Braves.
The goal sets a new single season career-high for Cutshaw.
Drake netted its first goal in the 12th minute of the match, and added on throughout the game.
The Bulldogs eventually built their lead to 3-0 before Cutshaw scored the team’s lone goal.
Drake later added an insurance goal to put the game out of reach.
The Braves will continue conference play on Saturday when they face Missouri State.
More from SportsMore posts in Sports »