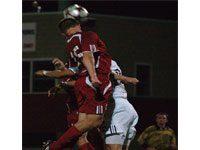 Bradley lost its first game of the regular season last weekend after traveling to Dallas to compete in the Prego Express Italian Invitational at Westcott Field hosted by Southern Methodist University.
“Traveling is not an excuse,” coach Jim DeRose said. “People often see traveling as a negative, but it’s positive for the team both as a whole and academically. This was our first weekend away, and on the bus the freshmen got a chance to talk to seniors about their experiences. And with all the down time, there is a lot of time to do homework.”
SMU wasted little time scoring against the Braves on Friday night, scoring the first goal in the second minute of the game. That goal was a result of a free kick by SMU’s Paula da Silva. It was recorded as the fifth-quickest goal ever scored against Bradley, and the fastest to start a game since 2005 when the Braves played Creighton.
The Mustangs kept up the pace by scoring a second goal just 3 minutes later from a header off a corner kick. Bradley tried to recover and tied the Mustangs with 15 shots, but none of them were successful. SMU won the match 2-0.
“On the positive side, we generated enough scoring chances to generate wins or ties,” DeRose said. “It was stiff competition against two top-15 nationally rated teams.”
Bradley gained an early advantage when senior forward Chris Cutshaw scored in the 11th minute of the Tulsa game the next day. This goal moved Cutshaw out of tied-for-fifth and into sole possession of fourth on Bradley’s all-time career point list with 66 points.
“Cutshaw was dangerous,” DeRose said. “And our whole back defense has been amazing, they have been in every minute of every game.”
Junior goalkeeper Drew Van Kampen saved the only shot Tulsa made in the entire first period of the game. But Tulsa came back strong in the second period, scoring a tying goal in the fourth minute.
The remainder of the game was back and forth between the Golden Hurricanes when the Braves until only a little more than 3 minutes remained, and Tulsa’s Jose Parada scored the winning goal for his team.
“The mark of any team is how they respond to losses,” DeRose said. “The biggest thing we will be focusing on is being athletic and strong, what I call Midwest style of soccer, and we will try to mimic and mirror the strength and speed of other conference teams.”
Bradley soccer will be home this weekend, playing Central Arkansas at 7 p.m. tonight at Shea Stadium.
More from SportsMore posts in Sports »