Soccer team tries to get to the bottom of recent struggles 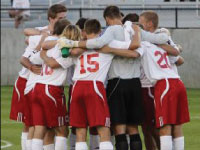 The Braves season has been nothing short of full of surprise on the pitch.
After the starting the season off well and finding their way into the national rankings, the Braves have dropped all seven games in conference and 11 stretching back to last season.
Not only have the Braves given up 15 goals in those last seven losses, but they have only come back to score two goals of their own in those contests.
One factor to this is that their opponents have 99 shots compared to the Braves’ 80 shots in the span of the past seven games.
“When you’re in a funk of seven losses in a row, you can look at all facets of the games played,” coach Jim DeRose said. “The three biggest problems are we have to score goals, we have to get consistent goalkeeping and we have to be in a position to win the game in the last 10 minutes. Lately we haven’t been doing those things.”
The Braves have not struggled like this in conference play in many years.
Their longest conference-losing streak before this was in the 2003 to 2004 seasons when the Braves dropped three straight conference games, two losses and one tie, to Drake, Creighton and Missouri State respectively.
“The last decade of soccer has been fun,” DeRose said. “We have been in the [conference] final four for the last 11 seasons and have won the conference title four times. One thing I like to stress is to play meaningful games in November and this year we don’t have anything to really play for championship-wise but we have to still stay focused.”
The Braves have worked hard this season, having practices that run for many hours into the dark.
“Absolutely it’s hard to take the field,” DeRose said. “When you’re winning everything is easier. It’s easier in the weight room, easier to train and easier to work hard. You just have to be professional about it no matter what. It’s like getting good grades. Even though you get a 68 on a test you still have to go to class and work hard.”
The Braves have three games left in the regular season, starting this week when they faceoff against Drake. The Bulldogs are ranked 17th in the RPI rankings for college soccer.
“You aren’t going to get any pity from the opponents,” DeRose said. “If we are going to win we are going to have to go out there and earn it. No one is going to give anything to us.”
Conference play this year hasn’t been the easiest stretch of opponents to have. Every team in the MVC has been in the RPI top-100 rankings this season.
With the final few games of the season, the Braves will try to rebound and win a couple to finish off strong.
More from SportsMore posts in Sports »