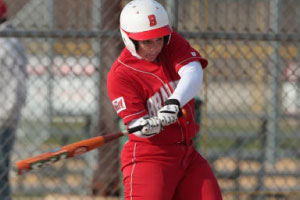 The softball team had a tough weekend in Carbondale, losing a three-game series against Southern Illinois.
“We played really well this weekend, it was just one inning in each game that got away,” coach Amy Hayes said. “[Senior Alycia] Bachkora had a really nice game at the plate and [sophomore] Katie Dennis threw really nice, overall we had a really good defense.”
Bachkora hit a total of two homeruns giving her eight total homeruns this season and was 3-for-8 this weekend, while Dennis suffered the loss falling to 3-9 for the season.
Bachkora started the team off well in the first game Saturday, by hitting a three-run bomb in the top of the third. Bachkora’s seventh homerun of the year gave the Braves a 3-0 lead.
It wasn’t until the bottom of the fourth that SIU scored. Allie Hanson’s double drove in Katie Wilson, leaving the score at the end of the fourth, 3-1 Braves.
Neither team scored again until the bottom of the seventh when SIU’s Alicia Garza hit a homerun with bases loaded, leaving the final score at 5-3 Salukis.
The score for the second game was once again started by Bachkora with a one-run homer in the top of the fourth giving the Braves a 1-0 lead.
In the bottom of the fourth, Garza had a two-run homer that was followed by three Bradley errors that allowed SIU to score four more runs putting the Salukis up 6-1 by the end of the fourth. In the sixth Bradley scored one more run on an SIU error, leaving the final score 6-2.
In the final game on Sunday, the Salukis scored four runs in the bottom of the first inning.  They followed this by a run in the sixth from a fielder’s choice.
SIU pitcher Nikki Waters had a no-hitter until Bachkora hit a single in the seventh to break it up. But this wasn’t enough for the Braves to get the win. The score of the final game was 5-0 SIU.
Three pitchers were used this weekend, senior Ashley Birdsong, Katie Dennis and junior Amanda Clack.
“All three of the pitchers did really well,” Hayes said. “We have three quality pitchers who complement each other, we probably have the most depth in the conference.”
While facing a tough weekend, the team swept a double-header on Wednesday. This moved them up two spots in the MVC standing.
Birdsong pitched both shut-out games and gave up only three hits and one walk. And in the second game she pitched a no-hitter through sevens innings. The final score of the two games was 2-0 Bradley.
The softball team has only three more conference games left in regular season, all against Missouri State this weekend.
The team hopes to make it to the Missouri Valley Conference Tournament that follows their regular season.
“To make it into the conference is the goal,” Hayes said. “We are hosting it so we are in it anyways, but we don’t want to rely on it. We want to prove that we are in it because we deserve it.”
After this weekend Creighton, SIU, Drake, and Northen Iowa have already secured a spot in the MVC Tournament, while Bradley will be in regardless because they are hosting the tournament.
The MVC Tournament starts next Thursday in East Peoria and will continue until Saturday.
More from SportsMore posts in Sports »