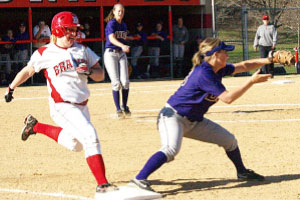 Senior pitcher Ashley Birdsong was on the verge of tossing a one-hit shutout on Wednesday night, but instead, she and the Braves walked away with a 1-0 conference loss to Northern Iowa.
Birdsong surrendered a leadoff single to start the game, but held the Panthers to one base runner for the next five innings.
Mackenzie Daigh was the only UNI player to get on base safely in that stretch, as she reached on an error in the top of the fourth inning and avoided being the tenth batter in a row retired by Birdsong.
With one out in the seventh, Birdsong’s counterpart, Jen Larsen, collected a one-out single to center field and was later driven home by Rachel Gerking’s double to the gap in right center. She tried to leg the hit into a triple, but was thrown out at third base for the second out of the inning.
After UNI took a 1-0 lead, senior Alycia Bachkora drew a walk to start the Bradley half of the seventh.
But the Braves were unable to take advantage of the base runner, as a failed bunt attempt, a fielder’s choice and a flyout ended the potential rally.
Larsen finished with a two-hit shutout for UNI, only surrendering hits to Bachkora and junior Amanda Clack. Larsen and Birdsong also each had four strikeouts in the game.
Clack’s hit came in the bottom of the second inning and had the potential to score the run the Braves were looking for, as junior Lauren Meister was already on base as a result of one of Larsen’s three walks.
Clack just missed a two-run homerun, but instead wound up with a double off the wall in left-center field.
Meister tried to score on the hit, but was thrown out at the plate, ending Bradley’s only legitimate scoring threat.
After suffering the tough loss, Birdsong fell to 9-8 on the season, but the complete game effort did help her break Bradley’s record for career innings pitched. With the seven innings tossed in Wednesday’s game, Birdsong passed Beth Hawkins’ record of 684.0 innings to give her sole possession of first place with 12 regular season games remaining.
The loss dropped the Braves to 15-20 overall and 6-7 in Missouri Valley Conference play.
Bradley will return to action Saturday when the Braves open a three-game series with conference rival Drake. The two teams will play a doubleheader at noon Saturday and finish the series with the rubber match, which will take place at noon on Sunday at Laura Bradley Park.
After the Drake series, the Braves will go on the road to play SIU-Edwardsville and Southern Illinois.
They will then finish out the regular season at home, when they host Indiana State and Missouri State.
More from SportsMore posts in Sports »