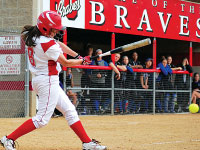 The softball team lost both sides of a doubleheader to Creighton under gray skies and scattered storms.
The seemingly volatile weather went hand-in-hand with the Braves’ up-and-down season, with a 15-28 record and second from the bottom in the Missouri Valley Conference after winning it last year.
Game 1 was moved up an hour to combat the rain, but the early start didn’t hinder the Braves.
Bradley jumped out to take the lead in the bottom of the first when junior Brittany Fairbairn hit a bases-loaded single. Fellow junior Katie Singler scored on a Creighton error to give the Braves an early 2-0 lead.
Even though Creighton countered with a run in the top of the fourth, freshman Taylor Cox took advantage of another error and took her base.
Senior tandem Amanda Clack and Janay Mitchell loaded the bases and the Braves were able to score another run on a suicide squeeze to take a 3-1 lead.
“Offensively yes, they have good numbers,” coach Amy Hayes said of Clack and Mitchell. “However we still strive to put complete games offensively and defensively together.”
Bradley seemed to have the game locked up in the seventh after a series of Creighton errors, and the Braves were sound on both the offensive and defensive facets of the game.
Junior Katie Dennis struck out two Bluejays’ batters after a single from Creighton’s Jessi Jadlowski.
Amy Baker hit a double with two outs to put herself and Jadlowski in scoring position. Dennis had Michelle Garner on a full count before Garner ripped a single that scored two runs and tied the game at 3-3.
An error, a triple and a bunt later, the Braves were behind 7-3. The bottom of the seventh gave the Braves a chance to strike back, but Creighton’s All-American pitcher Tara Oltman made quick work of the Braves, struck out the side and picked up her 22nd win of the season.
Like the previous game, the Braves took the lead early in the second game of the doubleheader.
In the bottom of the first, Singler helped Cox cross home with a bunt single. Senior Jacqueline Vitale’s base hit to center field drove in Singler and Mitchell scored on another bunt to give the Braves a 3-0 lead.
Creighton quickly tied the game 3-3 with a run-producing double by Creghton’s Christina Ruf and two wild pitches by freshman Mackenzie Camp.
Creighton continued its scoring trend in the top of the fourth with a single and a sacrifice fly to knock the score up to 3-5.
Oltman returned to the mound for Creighton, but senior pinch runner Megan O’Malley scored after Cox’s single in the bottom of the fourth.
After that, the All-American returned to form, made quick work of the Braves and picked up another of her conference-leading 23 wins.
Though the Braves performed well in both games, Hayes was able to point out why success has evaded them.
“We continue to play well, but can’t seem to get over the one miscue inning,” she said.
The Braves now find themselves in a five-game losing streak heading into the last regular season series against the Wichita State Shockers.
Hayes said she knows what the Braves must do to end the regular season on a high note.
“Put 21 quality innings together– and if we slip, get it back the next inning.”
More from SportsMore posts in Sports »