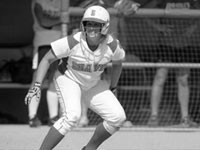 Bradley softball went down in program history last May by winning their first Missouri Valley Conference Tournament Title.
Softball ended last season with a new record of 12 conference wins putting them in sixth place in the MVC standings, the best they have done since 1995.
“We started off the year at .500 and had a couple of big wins against teams like Creighton and then we hit a little skid,” head coach Amy Hayes said. “We regrouped and talked about what we needed and returned to have an 11 game winning streak.”
The Braves carried over this winning streak to the MVC tournament by winning their first game against Missouri State (3-2), which was followed by a 4-2 win against the third seed Northern Iowa.
In he semifinals Bradley beat the second seed Southern Illinois and advanced to the championship game.
Ashley Birdsong, a senior from last year, hit a pair of solo home runs and helped the Braves to a 2-0 win against the first seed, Creighton.
”We won the MVC Tournament,” Hayes said. “It was the first time in program history.”
The Bradley softball coaching staff also received the National Fastpitch Coaches Association Midwest Coaching Staff of the Year for head coach Amy Hayes and assistant coaches Renee Enos and Jennie Shollenberger.
“It’s a really great honor because it comes from the voting of fellow coaches,” Hayes said.
She said Bradley softball had a lot of support from Bradley and the Peoria community.
“We had a lot of support but President Glasser was an especially big support to women’s athletics in general,” she said. “She even came to Missouri to watch us and was our biggest fan.”
Bradley also turned in success on the recruiting trail with five new recruits for this season.
Freshman Taylor Cox, from Greenley, CO, will be playing shortstop for the Braves. Junior college transfers Brittany Fairbairn and Kate Singler will be added as a new outfielder and a catcher/utility player. Mackenzie Camp and Brandi Ore will be pitching for the Braves.
More from SportsMore posts in Sports »