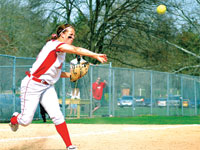 The Braves traveled to Indiana State to take on the Sycamores and won two of the three games.
In the first game of the series, the Braves needed extra innings to take down the Sycamores by a final score of 5-2.
Indiana State jumped out early, scoring the first two runs of the game. The Braves cut the lead to one on a two-out single by sophomore Jackie Roth in the fourth inning that scored senior Amanda Clack. Roth was 6-for-7 at the plate with two RBI’s in the doubleheader.
Roth scored in the top of the seventh after a bases loaded RBI groundout by freshman Taylor Cox.
Junior Katie Dennis shut down the Sycamores in relief. The Sycamores didn’t score for the rest of the game as Dennis struck out two and walked one in seven innings.
The Braves plated three runs in the top of the ninth to take the opening game of the doubleheader. Roth stole home to score the game winning run in the first game.
After taking game one to extra innings, the Braves made quick work of the second game, finishing it in five innings by the mercy rule by a final of 12-2.
The Braves put seven on the board in the top of the second inning which started off when Clack reached on an error.
She scored on junior Brittany Fairbairn’s team-leading third triple of the year. The Braves batted around in the inning and scored their seventh run off of a Clack single to score senior Janay Mitchell.
The Sycamores got a run in the bottom of the second on a bases loaded walk to cut the lead to 7-1 but didn’t get any more in the inning.
The Braves put a run on the board in the bottom of the third on an Indiana State throwing error, but the Sycamores answered in the bottom of the third with a run of their own to put the score at 8-2.
The Braves finished the game plating four runs in the top of the fourth inning and held the Sycamores scoreless to win in five innings 12-2.
In the series finale the Braves had chances in extra innings with the bases loaded in the ninth and a couple of runners in the 10th but couldn’t convert before Indiana State pushed home the winning run in the bottom of the 10th inning to win 3-2.
Both pitchers took shutouts into the sixth inning and Clack took the loss for the Braves, pitching 3.1 innings of relief for the starter Dennis.
“The team made some great strides this weekend,” Mitchell said. “If we take the positives from this weekend series with Indiana State, as well as improve this week in practice, then we should put ourselves in a great place for success during the Creighton series.”
The Braves take on the Creighton Bluejays at home this weekend in a three game series.
More from SportsMore posts in Sports »