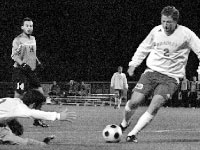 Junior Graham Stockdale’s first goal of the season wasn’t enough to hold off Butler as Bradley fell 2-1 in its final home game of the season.
Butler, who is ranked 21st in the nation, came back quickly with two goals to propel past Bradley.
“At this juncture, we try to get the goal … and then we give up two goals in relatively short succession,” coach Jim DeRose said. “You give up multiple goals and you’re going to have multiple losses.”
Stockdale ran alongside junior Chris Cutshaw on the attack to score the goal. Cutshaw had the ball and battled a Butler defender when the two crossed up legs and fell to ground.
In the midst of falling, Cutshaw shoved the ball off to Stockdale who scooted it past junior goalkeeper Nick Hegeman at the far of the net.
The Bulldogs didn’t let Stockdale’s goal get them down as they came back threatening to score with a mob of players in the penalty box.
Freshman netminder Kyle Orne, who received word earlier in the day he was starting, plowed through the mob to gain control of the ball.
“I was very happy with Kyle’s play,” DeRose said. “He deserved it.” 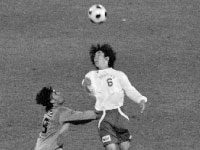 Butler had an ace up its sleeve, though, as junior Boris Gatzky came off the bench for the Bulldogs and answered back with a goal 13 minutes later.
“I’ve got a group of guys who believe in each other, are excited about the season we are having and just don’t want to lose,” Butler coach Kelly Findley said.
Later on, freshman Christian Meza received a pass from midfield and dazzled through two Butler defenders. The first player’s knees buckled and fell. Before the second player could blink, Meza was already past him.
The Braves had an opportunity to score with just one defender left to get by and freshman Bryan Gaul on the other side of the penalty box.
Meza dished it over to a wide open Gaul, but before Gaul could get a shot off, off-sides was called.
The Bulldogs capitalized on the Braves missed opportunity and stormed down the field with Gatzky leading the charge.
Gatzky passed it to sophomore Ben Sippola. Sippola gave the ball a boot, and Bradley freshman Bobby Smith attempted to block it with his foot.
Smith connected with the ball, but not enough to stop it dead, as the ball was redirected into the top of the net to give the Bulldogs the goal.
Although the score was a strike of good luck for the Bulldogs, DeRose said he thought it should have been prevented.
“We allowed a wide player to run inside and strike,” he said. “That is a cardinal sin in our program.”
In the second half, Bradley’s offense was shut down, and Findley said he had his team focus on the dangerous players on the field.
Freshman Rudy Garcia was in one of DeRose’s described melees in the game with an opportunity to score, but the shot curved right into the goaltender’s abdomen.
With 19 minutes remaining, Meza was charging for an untamed ball when he pounced on it at the same time Butler’s Kyle Vondenbenken was arriving at the ball.
Meza tried to blast it through Vondenbenken, and the force flipped Vondenbenken over and he landed on the ground.
DeRose’s said he was concerned he was injured.
“I wanted to make sure the ref wasn’t going to call it a reckless play and get a yellow card,” he said.
Vondenbenken was carted off the field after being down for a couple of minutes.
“I think he just got kicked on top of the foot, he’ll be fine,” Findley said.
Bradley couldn’t get much going after that, and the game concluded with a final score of 2-1.
Findley said after the game, he always enjoys playing against Bradley.
“Bradley is a very good team, it’s a great field and great place to play,” he said.
More from SportsMore posts in Sports »