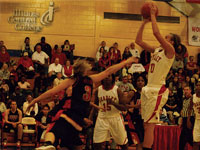 After last year’s bid to the NCAA tournament, the Bradley women’s basketball team has set high standards for this season.
The beginning of the season opener at Northern Illinois looked good for the Braves. They came out fast and in the first part of the game had a lead that was as big as six before surrendering the last 10 points of the half for the Huskies to take a 42-38 lead into halftime.
The Braves hit half of their 3-pointers in the first half but only hit one for the rest of the game.
The team started out the second half as fast as they did in the first, with junior Sonya Harris scoring the team’s first six points.
The contest was close throughout, having ties at both 60 and 65 points, but in the end, the Huskies’ play was too much for the Braves to handle.
The Huskies’ Ebony Ellis would lead a charge that put the Braves down by 11 points. Ellis was the game’s leading scorer with 22 points.
The Braves fought back to within seven, with less than a minute and a half to play, but the Huskies took the game 85-73.
The story of the game was points off of turnovers, in which the Huskies had a large advantage, scoring 27 of their 85 off of Braves’ turnovers.
Bradley shot 50 percent in the first half but cooled down considerably in the second, only draining a little more than 40 percent.
A shining moment of the game was Harris’ play. The Braves out-rebounded the Huskies 46 to 44, with Harris pulling down 13 of them.
In the Braves second game of the season and home opener, they once again started off fast. This time, however, they didn’t look back.
The Braves led throughout the entire game after coming out strong against Illinois-Chicago, scoring the first 11 points of the contest.
Harris posted her second double-double in as many games having a game-high 14 points with 11 rebounds, five blocks and a career-high three assists.
Junior Raisa Taylor scored seven of the Braves’ first 11 points in the first two and a half minutes of the game. UIC came back to cut the lead to seven, but the Braves pulled away when freshman Brooke Bisping started a 12-0 run, hitting a shot from behind the arc and also scoring with a breakaway layup.
The Braves lead would be as big as 20 in the second half, en route to a 79-64 win over UIC.
The big story of this game was the play made by the freshmen. Katie Yohn made her first career collegiate start and came out with a 13-point outing in her first game. Fellow freshman Olivia Allen was in double figures in scoring for the second straight game, with 11 points off the bench.
“I believe they [Yohn, Allen, Bisping] have made good adjustments to the college game,” said coach Paula Buscher. “The defensive adjustments are always the toughest for freshmen, and they are working hard on a daily basis to keep improving.”
She said one of the biggest surprises of the year thus far is the play of Allen.
“I wasn’t sure how quickly [Allen] would adjust especially at the point position,” Buscher said. “She has great speed and quickness which helps us push the ball offensively.”
However, the player to look out for this year is Harris, Buscher said. In two games she has recorded back-to-back double-doubles and has led the team in rebounds and blocked shots. She is also tied for most points with 29.
“Sonya has been a major factor in our first two games,” Buscher said. “She is a great shot-blocker and is a hard match-up in the post for our opponents.”
Harris attributes much of her success to her hard work during the offseason and practice.
“I believe it’s the willingness to improve my skills and develop as I learn new things in practice,” she said.
More from SportsMore posts in Sports »