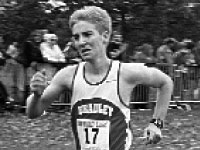 It took sophomore Brian Tyne a little more than 26 minutes to triumph through eight kilometers to finish better than 75 percent of the field.
“He excelled in taking his training and putting it into the race,” coach Dave Beachum said.
Tyne posted the best time for the men’s cross country team at Newman Golf Course that featured cattle-like herds of fans running themselves to keep up with the pace of the race.
At the sound of the gun, runners from 13 different schools bolted through Hole 16 of the golf course for the first two kilometers that were mostly flatland.
At this point Tyne was in the first of three tightly packed groups of players.
“Brian just works hard and he expects it out of himself,” Beachum said. “It’s a reflecion of himself and how he works through things all the time.”
In the second group seen together in stride were sophomore Tim Owdom, and freshmen Eric Garcia and Chris Frank.
Tyne could be seen for most of the race battling for position with two runners from Wisconsin-Milwaukee.
After the second kilometer in the men’s portion, five players from Iowa State pulled away from the rest of the pack, and it became a race amongst each other.
The third kilometer of the race was the most trying for the players because of the steep uphill followed by having to control their paces with an equalizing downhill.
The fourth kilometer was less steep, and after that the players looped and weaved a section of the course three times before finishing.
The first group of runners to cross the finish line for both men and women were the Iowa State Cyclones.
As Tyne came back onto the last leg of the race which concluded back on Hole 16, there was no one close enough for him to catch nor was there a runner who could catch him. Instead of coasting into his finish, Tyne sprinted to achieve his personal best finish for eight kilometers.
Owdom pulled away from his teammates as the race continued on to finish in 69th place. 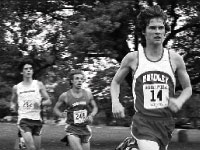 Frank stayed with the group of runners he was with most of the race, minus Owdom, to finish 82nd. Garcia finished nine spots behind him.
Freshman Sean Swanson came around the corner of visibility for the finish with a resurgence of speed in his legs and ran dead even with a DePaul runner for an exciting photo finish.
Swanson was given the nod at 111th place even though on paper his competitor finished with the same time, 30 minutes and eight seconds.
During the women’s race all five of Iowa State’s runners finished in the top 20.
Sophomore Mary Goldkamp posted the top score for the Braves as she finished six kilometers in less than 23 minutes.
“She went out a little too aggressive in the front,” Beachum said. “It was a situation where she can run better than that, but at the conference meet that will come together for her next week.”
Sophomore Lauren Fog finished five spots behind her in 46th and was followed by juniors Rachel Brubaker and Amanda Switzer in less than 10 seconds.
Sophomore Leann Murphy crossed the line less than a minute later to complete the race for Bradley.
More from SportsMore posts in Sports »