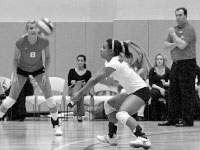 More than 500 digs this volleyball season can be attributed to the only set of twins in Bradley sports.
The Dejean twins have made a huge splash on campus in their opening year as they have been digging in the back court side-by-side, preventing attackers from finding the floor.
Genevieve, older by two minutes, and Rachelle found their niche on the hardwood after trying about every sport in the books as kids.
“We participated in gymnastics and tennis when we were really young,” Rachelle said.
In middle school the twins expanded their horizons and tried every sport they could.
“We did track, cheerleading, basketball, swimming, pretty much everything,” they said at the same time.
The duo started playing volleyball when their older sister picked up the game.
“Practicing with each other and developing as players helped,” Rachelle said.
The duo has since lit up the courts with a total of 548 digs combined this season, and Rachelle recently broke the record for most digs in a season by a freshman. She is one away from moving into the top-10 all time in a season for the Braves.
On the courts, the two can be seen wearing the same accessories. The notable difference is Rachelle has the opposite colored shirt since she has played libero this season.
So how can they be distinguished outside of their clothing?
“Rachelle is an inch taller,” Genevieve said.
Rachelle chimed in saying she also has a birth mark on her cheek and the longer hair of the two.
Days of playing on the court together aren’t as common for the Geisert roommates as one might think.
During their club play, Genevieve and Rachelle were split up for some of the years.
The two said it was always a big deal when they played each other, but it wasn’t a bitter rivalry.
“My 17’s year, when I made the switch to a rival club that was kind of farther away from [Naperville], it was same as me playing one of my best friends on the other club,” Genevieve said. “It’s more fun and games. I wouldn’t say it’s bitter unless I don’t like the person, and I like her.”
During their junior year in high school, Rachelle said her club squad always won but Genevieve was able to counter with the fact that in their senior year, her club squad always won.
When it came time to prepare for going to college, the Dejeans had the same thought, they were going to be a package deal or nothing.
“We always   knew we wanted to come to school together,” Genevieve said. “Everything just kind of came into place [at Bradley].”
The two visited Valparaiso and Butler before visiting Bradley, but when they came to the Hilltop, it felt right for them.
“In the end we found the one that was right for us,” Rachelle said. “I would say it was a combination of school academics, the volleyball program, because we love the team, and of course, my parents.”
Coming to school together has given the two a new opportunity to connect with each other as well.
“We had one class together in high school, math class,” Rachelle said. “That’s been the fun thing, having classes together.”
“That’s not really fun though.” Genevieve said right after with a laugh,
The two have their sights focused on being part of the resurgence of volleyball at Bradley.
“We’re just trying to keep moving up and getting those small victories,” Rachelle said. “I want to be remembered as a part of that change I hope for.”
Genevieve’s goal was to get the team into the top five of the conference and make the conference tournament at the end of the year.
With three seasons left to accomplish these goals and break some more records, at this pace, the twins could leave this school as one of the best duos in  the history of Bradley athletics.
More from SportsMore posts in Sports »