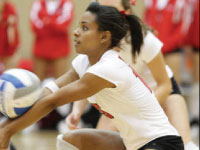 Despite hard-fought battles, the volleyball team fell to two conference opponents last weekend.
Senior Amy Reichel became the 19th player in school history to reach 800 career kills last weekend in the Braves match against Southern Illinois, and the Braves finished the Evansville match with season-high digs at 77.
“We are looking to make some in-roads in the MVC.  We had a good week of practice leading up to our matches at SIU and Evansville and it showed,” said coach Sean Burdette. “We have to continue to get better each time out in practice and need solid efforts from everyone on the team each day to push each other.  We need to have a sense of urgency each day out with only four weekends left in the regular season.”
The Braves lost to Southern Illinois 25-23, 24-26, 23-25, 23-25 and Evansville 13-25, 19-25, 25-20. 16-25.
“I thought we were very competitive from the first point out of the gate.  All the matches were a two point differential and could have gone either way,” Burdette said. “Reichel led us in kills and we got good attacking from [sophomore] Annie Cave and [junior] Caitlin Staib.”
Bradley was able to take the opening set against Southern Illinois. The Braves actually started off trailing one point at 21-20 but served up back-to-back kills to put them in the lead at 23-21.
A pair of Bradley errors allowed the Salukis to pull within one point of the Braves. But Cave posted the victory of the Braves with her fifth kill of the set.
Again, the Braves had the lead in the second set by one point 24-23, but SIU pulled even after a bad Bradley set. Two kills from the Salukis gave the set to SIU at 26-24.
For the second set in a row, the Braves started the set with the lead and lost it. Bradley held a 19-17 lead before a five-point  SIU spurt with two aces, giving the Salukis a three-point advantage, 22-19. Bradley was able to pull within one point at 24-23 but
SIU finished the set at 25-23.
The third set was no different from the first two, Bradley held the lead at 23-22 in the fourth set.  SIU was able to tie the set at 23-23 and a Saluki kill pulled the team in the lead. A block posted the final set win for SIU.
On Saturday, the Purple Aces forced Bradley into 31 attack errors and were able to post the conference win.
A .480 hitting percentage by Evansville boosted their win in the first set. Bradley only had a deficit of three-points when the Purple Aces had an 11-1 run and took a substantial lead at 22-9. Bradley had two attack errors that closed the set at 25-13 UE.
The second set had two lead changes and six ties before the Purple Aces took the victory. Evansville broke the last tie with a 5-2 run and UE built a three-point lead at 16-13. Bradley was able to pull within a point but Evansville acted on a pair of Bradley errors and posted the win at 25-19.
The third set was tied at 20-20 when a Bradley block gave the team the lead. Evansville had an attack error which was followed by two Bradley kills that gave Bradley a three-point advantage at 24-21. A final Evansville set error gave the Braves a third set win.
Evansville had a three-point lead in the fourth set before a 6-1 run that put the Braves in an eight-point deficit. Bradley’s 10th attack error of the set allowed the Purple Aces to take the win of the match.
After a weekend away, Bradley  will return home this weekend facing Indiana State at 7 p.m. Friday at the Markin Family Student Recreation Center and Illinois State at 7 p.m. Saturday at Illinois Central College.
“Northern Iowa is leading the MVC in the standings and is a very efficient team,” Burdette said. “We have to have everyone play to their capabilities for the duration of the match against a team like Northern. We are capable of doing that and our players have to go out and execute to those abilities and follow the game plan.”
More from SportsMore posts in Sports »