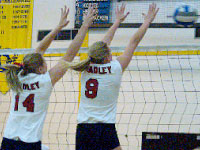 The volleyball team ended a 10-game drought with a victory over Indiana State on Saturday night.
Led by freshman Megan Schmidt’s 12 kills, two aces and four blocks, the Braves (5-19, 1-10 MVC) toppled the Sycamores (8-16, 2-9 MVC) in four sets to grab their fifth season win and the first in the conference.
“I thought Megan Schmidt and Emily Austin had very good matches for us,” coach Sean Burdette said. “With them being middle blockers, that allowed us to score some points and take some of the attention off our outside hitters, allowing them to score more points as well.”
Bradley started out the night a little flat, heading out of the gate with just a .115 attack percentage, leading to a 12-2 Sycamore run to start the first set. Behind Sarah Agnich’s four kills, Indiana State took the opening round 25-14.
Things didn’t look much better for Bradley at the outset of the second set. After an out-of-rotation call, the Braves quickly fell victim to an 8-1 Sycamore run before beginning to show some signs of life.
Bradley then began to rally back, working the deficit to 11-9, then 14-12 and 17-16 before a momentum-changing one-handed dig by junior Lyndi Senkpiel tied the set up. The Braves took the lead after a dual block by Schmidt and junior Amy Reichel fell on the Indiana State side of the floor for a point.
After Bradley extended its lead to 23-18, Schmidt threw in two consecutive kills to secure the win, 25-18.
“Sam Black started to set the middles more and that enabled us to score some quick points,” Burdette said. “But more than anything, we started following our team defense, which allowed us to start putting our game plan into play.”
Indiana State immediately jumped up 2-0 in the third set, but the run was quickly snuffed out as junior Kaitlyn Comiskey served six in a row resulting in Bradley points. By the time the set’s first time-out rolled around, Bradley was up 13-7 and never looked back.
After a huge dig by freshman Genevieve Dejean led to a point, the Braves increased their lead to 16-9 and eventually 19-12 by the time Indiana State called the game’s second time-out.
Bradley came out of the break with two big back-to-back blocks by Schmidt and Reichel before Schmidt’s kill pushed the game to 20-12.
A long serve by the Sycamores, and kills by sophomore Melissa Collins and freshman Annie Cave took the Braves to a 24-15 lead before another Schmidt kill capped off the victory.
Bradley quickly collected a 6-2 lead in the fourth and final set before a minor Sycamore run pulled it to a 7-5 Bradley lead. Behind three consecutive blocks by Schmidt and Cave, the Braves went back and forth with Indiana State. The score moved to 12-8 after Cave floated a return just out of Sycamore reach to begin a Bradley run that would bring the lead to 18-11.
A pair of long serves and a double-hit call on the Sycamores helped extend the Brave’s advantage to 20-15 before Schmidt slammed home her 12th kill of the night. She then headed to the serving line and shut the door on Indiana State with two consecutive aces, followed by a Cave kill and a Sycamore error to give Bradley the final set 25-17 and the match.
Bradley will return to the court tonight at 7 p.m. in Evansville, Ind.
“We have a tough road trip coming up with Evansville, who we took to four sets last time, and SIU, who we took to five,” Burdette said. “But having Emily back should help our blocking numbers and help us to be a little more well-rounded team.”
More from SportsMore posts in Sports »