Volleyball places second for second time in a row 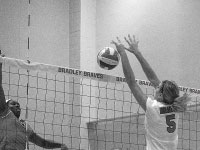 For the second consecutive weekend, the women’s volleyball team took part in a tournament. And much like last weekend, they finished with an impressive second place.
This time, they traveled to Radford University in Virginia to play in the Radford Invitational.
Teams use trips like this to not only gain experience on the court, but to help unite them.
“There are limited hours each day that team members get to see each other so it is good for the players to be able to bond and talk about things outside of volleyball,” said coach Sean Burdette.
Their first matchup was against South Carolina State. The Braves dropped the first set to the Bulldogs, 25-22. But they returned the favor in the second set winning 25-15.  Sophomore Annie Cave and senior Amy Reichel led the Braves to the second set victory.
The third set proved to be much closer than the last. With the score tied at 20 apiece, freshman Alise Tupuritis couldn’t be stopped from finding space on the Bulldogs’ side of the net, whether it was by kill or serve. The Braves finished off the set, 25-21.
The fourth set was all the Braves needed to close out the Bulldogs. Bradley went on to a 25-15 victory after the Bulldogs couldn’t seem to be able to finish off their kills. Bradley finished with four blocks in the fourth set.
“South Carolina was a very athletic team that had a tenacity to keep the ball off the floor on defense,” Burdette said. “Whatever we attacked them with they were able to get a hand on it and keep it in play.”
At the end of this match, Tupuritis recorded a game-high 15 kills and Cave and Reichel weren’t far behind with nine apiece.
In the second game of the tournament, Bradley drew Western Carolina. In the first set of another four set game, the Braves won behind a rally to complete the game.  Tupuritis ended the game at 25-20 with a kill.
The second game didn’t look to be going as well as the last after the game was tied at 24.  But junior Caitlin Staib and Tupuritis recorded kills back-to-back to give the Braves the win.
After getting the first two victories in this match, the Braves finally dropped a set to the Catamounts. Just like the last set, this was a close contest. With the score tied at 22, the Catamounts took the next three points to get the 25-22 win.
The fourth and final set ended with a Braves victory at 25-23. Cave finished with four kills. In the end, the Braves finished with 12 aces throughout these four games. That was the most they have had in a single game since they played the aptly named Evansville Purple Aces in 2001.
After the Catamounts, the Braves were set to square off with the Eagles of Coppin State.  This match only needed three sets to dispose of the Eagles. The Braves were led by Cave with four kills in the 25-15 victory.
The second set went just as smoothly as the first one. The Braves cruised to a 25-16 victory behind sophomore Megan Schimdt’s two aces and four kills.
The third set started roughly for the Braves, who were down 6-1 at one point, but rebounded to take a 25-20 win behind a 9-1 run. Junior Melissa Collins’ two kills led the late run. Collins finished with six kills in the third set.
Those three wins led the Braves to their second straight opportunity to win a tournament in two tries. They finished in second last week after losing to IUPUI.
This time they had to play the tournament hosts, the Radford Highlanders.
In the first set, the Highlanders cruised to a 25-14 victory after they quickly mounted a 18-9 lead.
The second set was a tightly played contest that contained 11 ties including ones at 23, 24 and 25 points. But in the end, Radford pulled through and took down the second set by the score of 27-25.
The third set featured great play at the net as the Braves got their only win of the match with a score of 25-17. At first, it looked like they were going to suffer a sweep after falling behind 9-6 at the onset of this match, but five straight points put the Braves ahead 11-9. From that point on, they never looked back in this set.
The fourth set proved to be all the Highlanders needed to close out the Braves.  At the end of the match, it seemed Bradley would be able to fight its way to a fifth and final set, but the Highlanders proved they deserved the title by scoring five unanswered points to close out the set with a score of 25-22.
Now that the Braves have two tournaments under their belts, they will look to improve upon those second place finishes in their third tourney in a row.
“We are excited about the rest of the season,” Burdette said. “The season is only a few weeks old and we have a long road ahead of us with another tough home tournament this weekend and then the Valley conference play starts next weekend on the road at Creighton and Drake.”
This weekend, they play host to the CEFCU classic at the Markin Family Student Recreation Center. The Braves now hold a record of 6-3.
More from SportsMore posts in Sports »