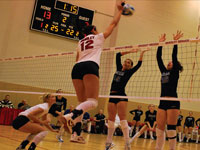 Volleyball coach Sean Burdette started playing competitive volleyball when he was in the eighth grade. Now he has been the Braves’ head volleyball coach for two years and is the seventh coach in program history.

“[It was] a natural progression for me from playing volleyball way back in junior high ,and I played in high school and college,” Burdette said. “I always thought about coaching as a career option.”

Burdette started his coaching career in 1993 at Bexley High School in Ohio where he was freshman and JV volleyball head coach and assistant coach to the varsity team.

From there he moved on to coach the women’s club team at Ohio State, where he eventually became a volunteer and assistant coach at the varsity level.

He also served as head coach at Towson University and finally joined Bradley in 2008.

“Coaching is my first and foremost passion,” Burdette said.

He said he has worked hard in his coaching career and continues to work hard at Bradley. He translates his work ethic into his expectations of the team.

“The city and campus have been a good fit,” Burdette said. “Bradley fans are tremendous. The community and people get involved and stay involved.”

Burdette’s future goal for the program at Bradley is to make the top-six in the MVC which would qualify them for the conference championships.

The Braves are away next weekend, facing Wichita State on Friday and Missouri State on Saturday.