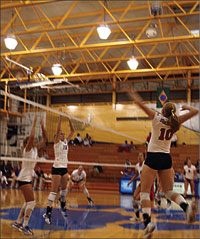 Bradley blew away Western Illinois in four sets on Tuesday.
The Braves are now 4-1 on the season when they win the first set.
“The goal is always to win the first set,” coach Sean Burdette said. “We want to be the first team to 10 points. Statistically the team that reaches ten points first wins about 80 percent of the time.”
On the downside, when Bradley cannot capture the first set, it has yet to spark a come-from-behind victory.
“It is hard to play catch up,” junior Amy Reichel said.
During a span of five days starting Sept. 19, the Braves played a total of 14 sets, winning six. Half of those wins came Tuesday against Western Illinois as the Braves snapped their season-high five game losing skid.
Bradley 3, Western Illinois 1
Freshman Rachelle Dejean accounted for more than a third of the Braves digs against the Westerwinds.
“She was making great plays and it picked up our intensity,” freshman Megan Schmidt said.
Dejean’s strong defensive performance combined with an all-around effort from the rest of her team propelled the Braves to their tenth win in a row against Western Illinois.
The match started a three game road trip that will culminate against  foe Illinois State.
“I think any week that we’re going to be on the road for an entire week it’s good to start the week off with a win,” Burdette said.
Reichel and sophomore Melissa Collins led the way on offense for Bradley as they both had 12 kills in the game.
The Braves didn’t allow Western to reach the 20-point mark in the first two games before dropping the third set by four points.
Bradley came out firing in the fourth set but the Westerwinds didn’t back down as there were six lead changes throughout the fourth set.
Neither team was able to produce a win in regulation, but the Braves notched on the final two points of the game to close out the set and mark a victory in the record books.
Creighton 3, Bradley 1
Reichel said before the game she was looking forward to playing against Creighton because it would show how the Braves could perform against a known force in the Missouri Valley Conference.
The gymnasium at Illinois Central College was heavily populated with red and white shirts in support of the Braves, it also featured a slew of fans in 1980’s business coats taunting the Bluejays.
“It is an extra boost, you definitely feed off of the crowds energy,” Reichel said.
Having dropped the first two sets ,the Braves headed into the locker room with their heads hanging below their shoulders.
Once the intermission ended, the team’s frown was turned upside down as they hustled out to the floor to get in as many warm-ups as they could.
The Braves fended off Creighton’s multiple attempts to get back into the third set but Creighton’s own mistakes gave the Braves hope for a comeback.
Bradley looked to have the fourth set in the palm of their hands with a 22-19 lead, but the Bluejays had ideas of their own as they tied the game at 22. Bradley regained a slim one-point lead but couldn’t hold it as Creighton took the next three points to close out the match.
“I think what we need to do is remain calm in those situations,” Burdette said.
More from SportsMore posts in Sports »