Volleyball suffers tough losses at the hands of MVC opponents 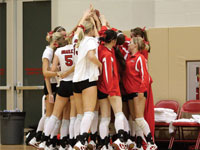 Bradley volleyball dropped two conference matches last weekend.
Bradley fell to MVC leader Missouri State 25-18, 25-10, 25-12 and Wichita State 25-19, 25-17, 25-16.
Missouri State used a solid defense to help them secure a victory over the Braves. The Bears had a 37-28 advantage in digs and they were able to out block the Braves 8-2.
“We did not compete as well as we did the following night versus WSU,” coach Sean Burdette said. “Again, errors were a big problem and we gave the opponent too many points they did not have to earn.”
Bradley trailed the Bears 18-15 in the first set when Missouri State scored three consecutive points to put the Braves in a six-point deficit at 21-15. Bradley close the deficit to five points at 23-18 when a Bradley attack error gave the victory to Missouri State at 25-18.
The Bears were able to score an early lead in the second set by scoring 12 consecutive points, giving them a 17-3 lead.
Bradley was able to score six of the next nine points, but Missouri State followed with a 5-1 spurt to give the Bears the 25-10 victory.
Bradley was able to get an early lead in the third set, but the Bears answered, scoring eight consecutive points, leaving them with a 15-2 run leaving Missouri State with a 17-7 lead over the Braves.
The Braves deficit would grow to 13 by the end of the game, and the Bears took the game 25-12.
The Braves returned to play Saturday against Wichita State. Wichita State swept the Braves 25-19, 25-17, 25-16.
“I thought we competed well after we got through a bunch of unforced errors in game one,” Burdette said. “We just made too many mistakes to pull close.”
Wichita State opened the first set with a 10-point advantage at 13-3. The Braves were able to pull within five points several times, but were not able to take the lead. The Shockers posted the victory, 25-19.
The Shockers posted eight of the first nine points in the second set, but Bradley answered back scoring three consecutive points but Wichita State responded with a 8-2 spurt to give them the lead at 16-6. A final Shocker run closed the set at 25-17 Wichita State.
Wichita State opened the third set with a 6-4 lead and preceded to score the six consecutive points to take a 12-4 lead. The Shockers .387 hitting percentage in the third set helped them get the victory at 25-16.
The Braves will be on the road next weekend when they face Southern Illinois and Evansville.
“Two very tough opponents and tough places to play on the road. SIU is very athletic and explosive,” Burdette said.
The team must be prepared to stop SIU middle hitters from opening up the outside, Burdette said. Evansville is also a strong team in terms of ball control and setting the tempo they want to play.
More from SportsMore posts in Sports »