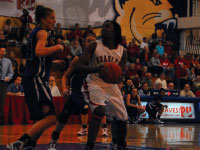 After a loss to the Missouri Valley Conference leader, Illinois State, the Braves traveled to Indiana State to take on the team they beat in the previous month, but got off to a slow start.
The Braves started 1-10 shooting in the game which left the door wide open for Indiana State to go on an 11-3 run.
The Braves trailed by seven points nine minutes into the game when the Sycamores hit back-to-back 3-pointers to put the Braves even further in the hole.
Freshman Katie Yohn hit a 3-pointer with around seven minutes left in the first half, but the Sycamores came right back going on a 9-2 run and giving them a 15-point lead with just four minutes left in the first half.
The offensive burst for the Sycamores was fueled by three-pointers, hitting six of their 11 in the first half, while the Braves shot under 30 percent from the field.
Behind a strong defensive effort, they got back into the game. They held the Sycamores to 0-4 shooting in the first nine minutes of the second half, while forcing Indiana State to commit five turnovers. The Sycamores first bucket came when Kelsie Cooley hit a shot with less than 11 minutes left in the game.
The defensive effort helped the Braves embark on a 13-1 run which put the score at 39-31.
The Sycamores hit back-to-back 3-pointers to put the lead back into the double digits at 47-34. The Braves got back within 10 points of the lead after a Yohn 3-pointer but that was as close as they were able to get.
In the first half, the 3-pointers were the story for the Sycamores, but in the second half it was their free-throw shooting, hitting 11-12 from the charity stripe down the stretch to seal the victory for Indiana State.
Coming off back-to-back losses for the first time since early January, coach Paula Buscher said she is confident the team will finish strong.
“We are still in the hunt for the top three spots in the Valley and need to just continue to focus on our next opponent,” Buscher said.
The Braves close out the regular season at home tomorrow when they face off against Missouri State.
“We are glad to be at home for our final games,” Buscher said. “We had a set back this past weekend but we will get back on the court and be ready to step up our play.”
More from SportsMore posts in Sports »
We want to let you know that we use cookies to ensure that we give you the best experience on our website. If you continue to use this site we will assume that you are okay with it. Sounds good