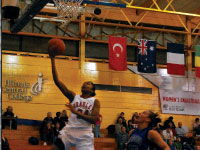 In a game that seemed to be lost from the start and had many momentum changes, the Braves came back from an early double- digit deficit to win by the 63-55.
Freshman Katie Yohn hit the first basket of the game on the Braves’ opening possession, but that didn’t stop Drake. The Bulldogs went on a run to take an early 11-point lead over the Braves.
Eight minutes into the game, it looked the same as the Bulldogs held a 20-9 lead.
Yohn started things up scoring five points during an 11-2 stretch, pulling back within two points of the Bulldogs, 22-20, with five minutes to play in the first half.
The Braves played excellent defense, holding the Bulldogs to just two points in a seven-minute stretch.
“We know how important it is to play for 40 minutes,” coach Paula Buscher said. “The game is never over and it is all about making defensive stops and going on a run.”
The second half started much differently than the first, as the Braves went on a 7-2 run, which gave them an early 33-30 lead in the half. Drake regained the lead before senior Renee Frericks connected from behind the arc to spark a 19-4 Braves run. Frericks  hit two more 3-pointers during the run gave the Braves a 52-39 advantage with seven minutes remaining in the game.
Drake hit eight straight shots, while cutting the lead to 3 late in the second half. The Braves’ defense picked up and only allowed the Bulldogs to hit two more shots and forced five turnovers down the last four minutes of the game.
At the end of the game, the Braves were a perfect 6-for-6 from the free-throw line to close out the victory, 63-55.
Yohn had 16 points and four steals in 37 minutes of play while Frericks had all 12 of her points in the second half and senior Sonya Harris had 11 points, six boards, two assists, two blocks and two steals.
Buscher said it is no surprise that three freshmen are stepping up and giving it everything they’ve got.
“All three [freshmen] have done a nice job for us this season,” Buscher said. “Brooke [Bisping] is one of our toughest players.She will do whatever you tell her to and always gives 100 percent. Olivia [Allen] brings such speed and quickness to the court and Katie [Yohn] has broken back into the starting line up and is an offensive threat every time she gets the ball.”
While Yohn gained praise from Buscher, she was also the MVC Newcomer of the Week announced by the league on Monday afternoon.
“The team has really encouraged me and helped me out this season,” Yohn said. “My play has helped the team succeed because of their encouragement and help throughout the year.”
Yohn also said down the stretch the locker room has felt very intense but with a relaxed feeling as well.
“We know what we have to do to win and improve our play as a team,” she said. “Intensity at practice helps us win and achieve our goals.”
More from SportsMore posts in Sports »