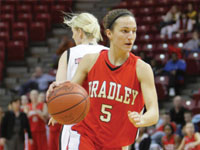 After losing to Illinois State, the women’s basketball team has charged back, winning their last two games, both in conference.

The Braves (12-9 overall, 8-3 MVC) traveled to Evansville for the first game of a three-game road trip. Bradley started early and fast, scoring the first 11 points of the game last Friday.

The Braves started the game on a 17-3 run putting the game out of reach for Evansville from the beginning.

The Purple Aces fought hard, however, and pulled within eight points after they scored 10 straight during a Braves’ scoreless streak, which lasted five minutes.

Evansville pulled within five by the end of the first half and was down by only one at one point in the second half. The game was relatively close down to the wire, where the Braves held just a slight two-point edge with two minutes to play.

The Braves didn’t look back and pulled away with a pair of steals and breakaway lay-ups to end the game on a strong note, grabbing the win 68-58.

Senior Jenny Van Kirk was the leading scorer with 14 points and eight rebounds.

The Braves then traveled to Southern Illinois to face off against the Salukis.

This game was different for the Braves than their last, getting off to a slow start offensively.

The Braves’ led with 7:30 remaining in the first half when freshman Brooke Bisping and senior Renee Frericks hit back-to-back 3-pointers, sparking a 12-2 run that broke the game open for the Braves.

The Braves picked up their fourth consecutive road win, keeping them in a tie for second place in the conference with Creighton and Missouri State.

“I think the team responded very well to the loss to ISU,” Van Kirk said. “Any time you can go on the road in the Valley and win two games, you put yourselves in a great position. We did that this weekend and will continue to work to improve.”

Coach Paula Buscher said the team needs to keep a focus on playing one game at a time and not looking too far down the road.

“You can’t look past your next opponent,” she said. “Defense and rebounding have been the big keys to our success and we will continue to focus on those areas. Our goal is to continue to improve each day and while we may not be getting a lot of style points, our hard work and attention to detail have gotten us into the position we are currently in.”

The Braves will travel to Northern Iowa on Saturday to end their three-game road trip.