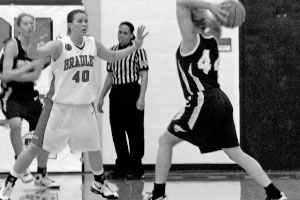 Senior Monica Rogers put up 14 points in the second half of Saturday night’s home contest against Northern Iowa to lead the women’s basketball team to a come-from-behind Missouri Valley Conference win.
Rogers finished with 18 points and a game-high eight rebounds in the 69-58 Bradley victory, which improved the Braves to 17-6 overall and 8-4 in the Valley.
“Monica just went after it in that game,” coach Paula Buscher said. “When she plays like that, she is very hard to stop.”
Saturday’s performance also earned Rogers some conference recognition, as she was named the MVC Player of the Week for the first time in her career.
“She has been pretty steady for us all year,” Buscher said. “She has had a few struggles this year with injuries, but, overall, she is just an offensive threat every time she touches the ball.”
Bradley also received 14 points from freshman Michelle Lund and 11 from junior Jenny Van Kirk off the bench. Both Lund and Van Kirk had a pair of 3-pointers for the Braves, while junior Skye Johnson added four steals and eight assists to complement her six points.
Junior Kim Wypiszynski scored 13 of UNI’s first 19 points and finished with 30 to lead the way for the Panthers (7-16, 5-7 MVC). Wypiszynski hit 12-of-19 from the field and knocked down 6-of-9 from the free throw line, while freshman Indy Uhlenhopp added another 11 points for UNI.
“I thought our attention to detail was so much better this time around against Northern Iowa,” Buscher said. “We made some mistakes in the first half and made some adjustments in the second half, but I really think that’s what this team is about – being able to make adjustments and play with them.”
With sophomore forward Sonya Harris limited to just 7 minutes in the first half because of foul trouble, Bradley was able to connect on only 10-of-25 shots from the field in the opening period. After suffering a scoring drought nearly 5 minutes long, the Braves found themselves down 26-22 at the break.
Bradley didn’t fly out of the gate in the second half, hitting just two of its first nine shots, but after a Lund’s 3-pointer jump-started a 13-2 Braves’ run, momentum made its way to the BU side of the floor. By the conclusion of the run, Bradley had taken a 40-32 lead with 13:53 remaining in the game.
UNI cut the lead to three points with two consecutive buckets, but Bradley went on another scoring spurt, this time out-scoring the Panthers 11-3, to increase the lead to 51-40 and lock down the Braves’ fourth straight victory.
All four of those wins have come against MVC teams, but Bradley remained in a tie for fourth place in the conference with Indiana State.
The Braves took on Creighton  on Thursday night, but results were not available at press time.
Bradley will conclude its current home stand at 2:05 p.m. Saturday when the Braves take on Drake at Illinois Central College’s Lorene Ramsey Gymnasium.
The Bulldogs won the teams’ first meeting of the season by a score of 71-51, but Buscher said she is anxious to get another shot at third-place Drake.
“Our last time out, we didn’t really play the way we knew we needed to play,” she said. “But I’m really glad we are at home against these guys. Drake has played very well at home, so I hope that getting them at our place will be a big help.”
More from SportsMore posts in Sports »