Women’s cross-country runs away with title 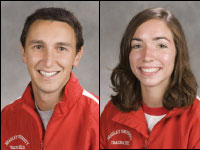 No one was going to stand in front of the Lady Braves in their first race of the year.
Redshirt freshman Nicole Benson finished more than a minute in front of the rest of the field.
“Nicole had set a strategy of getting out fast and being clear of the field,” coach David Beauchem said. “From there it was just a matter of her being able to keep pushing herself and staying on the pace.”
Benson’s first place finish led the Braves to the Western Illinois Invite team title and earned her the Missouri Valley Conference Women’s Cross Country Runner of the Week. The Lady Braves took the title from a field of seven teams and got their top five runners in the first 11 places.
Freshman Emily Gustafson finished in third place with a time of 23 minutes and ten seconds in the six-kilometer race.
Senior Rachel Brubaker wasn’t far behind, placing fifth with a time of 23 minutes and 28 seconds. Seniors Tracy Lotter and Amanda Switzer finished in 10th and 11th places respectively.  They completed the course within 10 seconds of each other.
“We used this meet to get an idea of where we are right now and what we have to work on,” Beauchem said.
In addition to the ladies, the men’s cross country team competed at the Western Illinois Invite as well and placed in third place out of six teams. The men’s team competed against some prime competition in Augustana, the 11th ranked Div. III cross-country team.  Junior Andrew Wieser placed eighth with a time of 26 minutes and 18 seconds to lead the Braves.
“It’s really nice to race against a team like Augustana this early in the season,” Wieser said. “They have a ton of depth and also a lot talent in the front.”
The rest of the team followed Wieser on the eight-kilometer course.  Freshman Jon Richards placed 10th with a time of 26 minutes and 25 seconds.
“He ran a great first collegiate race and I know that it is only the first of many,” Wieser said. “He is a workhorse and trains as hard as anyone I have ever seen and will only improve over time.”
Seniors Nathan Ahart and Pat Greene were the next Braves to complete race, finishing in 13th and 16th places respectively.   Rounding out the top five for the Braves was junior Zach Bowling in 17th place.
“This year is a little different because we have so much more depth and talent than in previous years,” Wieser said. “Our goal is to really have our number three to six guys all within a few seconds of each other and as close to the front couple runners as possible. The impact of this pack is huge because they can make or break a cross-country meet.”
Next week, the Braves will host the Bradley Open at Detweiller Park in Peoria.  Both the men and women’s teams will compete during next week’s meet.
More from SportsMore posts in Sports »