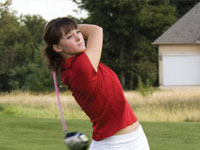 The women’s golf team opened its season with a second place finish by junior Breanne Neufeld and a fifth-place finish
The 15 team Payne Stewart Memorial tournament, hosted by Missouri State, was the Braves first meet of the season.
Neufeld ended her third round tied for first with Arkansas State’s Jennifer Welch, but Welch took home top honors on the second playoff hole.
Neufeld shot three rounds of 75-72-72 to shoot an overall 219 on 54 holes.
“She was, as sports psychologists like to say, ‘in the zone,’ ” coach Bo Ryan said. “Her focus, her attention to detail in hitting golf shots and her compassion to compete was above reproach. It was one of the top five, if not top three, efforts all-time by a Bradley female golfer.”
Placing for the Braves after Neufeld was sophomore Kelly Amundrud with a 233, which was good enough for a tie at 22nd place. Amundrud bounced back after an opening round of 82 with a 76 and 75 for her last two rounds.
Sophomore Keegan Ryan and junior Caitlin Deeken were the third and fourth Braves to finish, tying at 36th with 237 strokes throughout the tournament. Ryan started off strong with an opening round 75 and wrapped up the tournament with rounds of 82 and 80. Deeken started with an 83 but finished strong with rounds of 79 and 75.
Wrapping up the places for the Braves was freshman Natalie Wisniewski in a tie for 53rd. Wisniewski shot an 84 in her first round of college play. Her next two rounds dropped in score: 82 and 79.
“What pleased me the most at Missouri State was that everyone in the lineup contributed, from the No. 1 position through the No. 5 spot,” coach Ryan said. “That’s a big statement for a team that has no seniors and only two juniors. Knowing anybody can contribute at any given time is the most valuable asset in collegiate golf.”
The Braves next action is on Oct. 5 and 6 when they play in the Johnie Imes Invitational at University of Missouri.
“We go into every tournament knowing if we play to our abilities, we can win that tournament,” coach Ryan said. “Our expectations are to expect to win each time we tee it up.”
More from SportsMore posts in Sports »