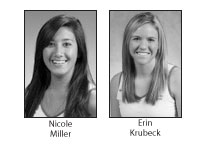 The women’s tennis team destroyed visiting Valparaiso, and didn’t lose a single set on its way to a 7-0 sweep.
The victory snapped a streak of two consecutive losses in season openers.
Coach Scott Petersen said he was pleased with his team’s performance.
“Not dropping a set was great and it really set the tone for the next match,” he said. “We have really tried to focus on only the next match and learn from the previous match.”
Bradley opened competition with three wins in doubles play to get out to an early lead.
Sophomore Nicole Miller and junior Emily Regenold, debuting in the top doubles spot, procured an 8-3 win.
An 8-1 win from the No. 2 doubles pairing of juniors Kelly Donohue and Jessica Buterbaugh, and a similar 8-1 result from seniors Kim Braun and Erin Krubeck in the solidified the doubles point in third spot for the Braves.
The team remained dominant in singles play.
Miller led the way from the No. 1 spot, winning 6-1, 6-2. Regenold won in the second spot 6-3, 6-2, Donohue won 6-2, 6-3 at No. 3 and Buterbaugh won easily, procuring a 6-0, 6-1 win.
The two seniors rounded out the singles competitors from the No. 5 and No. 6 spots, with Braun winning 6-0, 6-0 at the fifth singles spot and Krubeck winning 6-0, 6-2.
Following the strong all-around performance from the team, Petersen was unable to single out any one performance as key.
“I don’t know if there was one match or player that stood out from the others,” he said. “I feel everyone put in the work at practice and it paid off when it was match time.”
Petersen said he was extremely pleased with the way the team started the season.
“We came out on Sunday and did exactly what we needed to do,” he said. “We played our game and did not let our opponents dictate what type of matches they wanted.”
Petersen said he is optimistic about the rest of the season.
“I think if we continue to do the right things in practice and off court, we can surpass the marks set last season,” he said.
He was also confident the team could keep its play at such an elevated level because of members’ commitment to practice.
“This team is extremely hard working,” he said. “That work ethic, plus the goals we have set and the promises we have made to each other, will help keep us on the right path.”
The season continues for the Braves this weekend in Indiana, where they will be competing against Robert Morris University and Indiana University-Purdue University Fort Wayne on Saturday, before visiting Ball State on Sunday.
More from SportsMore posts in Sports »