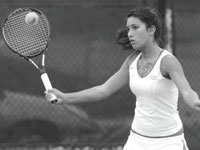 The women’s tennis team traveled to Cincinnati last weekend for the Queen City Invitational and came away with some lumps and bruises after taking on some tough competition.
The Braves hung tough on their first day of action at both singles and doubles, but in the end, could not secure a victory at either.
“I think anytime we can play against good competition it helps us, whether we win or not,” coach Scott Petersen said.
In the “A” singles flight, junior Nicole Miller fell to Maha Guirguis of Toledo by a score of 6-1, 6-2. Miller was then forced to withdraw because of illness.
Senior Emily Regenold also competed in the “A” flight for singles, and she suffered a tough defeat at the hands of West Virginia’s Katie Haught. Regenold kept the first set close but Haught secured the set 7-5, and took the victory with a second set score of 6-2.
In flight “B” singles, like Regenold, senior Kelly Donohue dropped her first match against Ball State’s Katherine Rist, after losing a tough first set. Rist came away victorious in the first set, 7-5, and won 6-2 in the final set.
Her next match was against Cincinnati’s Jessica Wise, and Donohue lost another tough set to her competition, 7-6. Wise finished off the victory with a second set win, 6-1.
The Braves other competitor in the “B” flight was senior Jessica Buterbaugh. She played against Xavier’s Kaitlynn Zinn, who won the match 6-1, 6-3. The next match for Buterbaugh was against Hayley Hall of Ball State, who won 6-3, 6-2.
Freshman Kennedy Scott competed in the flight “C” singles for the Braves and won her first set 6-2 against Molly Mathews of Dayton, but Mathews recovered to win the last two sets, 6-4 , 6-4.
Scott retired due to illness and did not participate in her second match.
The last Brave to play singles on the first day was another freshman Brigitte Graf. Graf dropped her match to Ball State’s Annica Darud, 6-1, 6-3.
After her match, Graf became the third Brave to retire due to illness.
At “A” doubles, Miller and Regenold battled and came up just short in a 9-8 match against Cincinnati’s doubles team of Saffiya Ismail and Wise. They then withdrew from the tournament due to Miller’s illness.
The other Braves “A” doubles team of Buterbaugh and Donohue played Bowling Green’s tandem of Chiricosta and Eccleston. BGU walked away with an 8-0 victory.
On Saturday, Buterbaugh and Donohue took on West Virginia. Bradley could not secure the victory though, losing 8-6.
Saturday had more promising results for the Braves. Regenold won a hard-fought three-set battle against Ball State’s Kylee Johnson, 3-6, 6-2, 10-6.
Donohue also picked up a victory against Dayton’s Chelsea Glanker, 6-1, 6-1.
Rounding out the action for the Braves was Buterbaugh, who lost to Dayton’s Laina Grote, 6-2, 6-1.
“It was a tough weekend for everyone,” Petersen said. “We are now focusing on the Missouri Valley Conference Individual Championships.”
The women’s tennis team is back in action at the MVC individual Championships today in Evansville, Ind.
In additon to the women’s team, the men’s team competed at All-American Tennis Championships. Senior Milos Romic had a bye in his first round and moved straight into the second round.
Romic played against TCU’s Santiago Centeno and came out victorious for the win, 6-3, 6-7, 10-6. With that win he moved into the third round where faced Washington’s Derek Drabble and lost in consectutive sets, 6-2, 6-2.
Senior Callen Fraychineaud lost his opening match against Tobias Flood of SMU, 6-3, 2-6, 10-3.
Freshman Brock Reiman lost to Sven Kasper of Wichita State, 6-4, 6-3.
Freshman Eric Nguyen fell to Ole Miss’ Tucker Vorster, 6-2, 6-1.
More from SportsMore posts in Sports »