Women rebound from deficits to start 2-0 at home 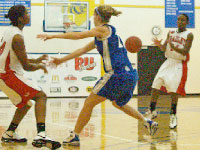 A combined deficit of 20 points in the Braves’ first two games was not enough to put the women’s basketball team away.
Bradley was down by eight at the half against Eastern Illinois and came out firing in the second half shooting more than 51 percent from the field.
Senior Monica Rogers recorded a double-double with 22 points and 12 boards in the paint.
Freshman Michelle Lund lit up the perimeter game for Bradley with four three pointers and two baskets within the arc for 16 points.
Bradley 67, Loyola-Chiago 60
The women’s basketball team overcame a sloppy first half and a 12-point deficit to beat Loyola 67-60 in Saturday’s regular season opener.
After committing 22 turnovers and being outscored 32-21 in the first 20 minutes of play, the Braves rode strong second-half performances by Rogers and sophomore Sonya Harris as they battled back to get the win. Rogers finished the day with 19 points – 15 coming in the second half – and nine rebounds to lead all scorers.
Harris put up a double-double with 14 points and 11 boards.
“I just looked up at the scoreboard and told Sonya ‘We have to push it,” Rogers said. “It’s always great to get the first game of the year, especially with the way we gelled in the second half with all of the freshmen. It was kind of an ugly win, but it’s still a win.”
One of those was Lund, who ran point for the Braves for 27 minutes in her first collegiate game and came through with what could have been the biggest shot of the day for Bradley – a 3-pointer to take the lead with 6:16 to play.
“I had a wide-open look, so I pulled it back behind the line because I knew we needed to step up and that a three would give us the lead,” Lund said. “It was great to make that shot, too, because that was the shot that started our run.”
The two teams traded points to begin the game, keeping the score close out of the gate. Bradley took a 16-15 lead on a Jenny Van Kirk jump shot, but began to feel the wheels falling off after Harris and junior Skye Johnson got themselves in early foul trouble and spent a large portion of the first half on the bench.
Harris played just four minutes in the first half after being tagged for three quick fouls.
Johnson, the defending Missouri Valley Conference Defensive Player of the Year, played only 10 minutes in the first half, but came back in the second half to play all but one on her way to racking up 13 points, six steals and six assists.
Loyola took advantage of the time Harris and Johnson spent on the bench, mounting a 16-3 run thanks to an abundance of turnovers and missed looks by the Braves.
Bradley came out looking like a different team in the second half, stringing together a 12-1 run of its own behind a block by Lund and a pair of steals by Johnson. An outlet pass from Lund to Rogers led to a breakaway layup to bring the Braves to a 47-46 deficit.
A Johnson block on the ensuing Loyola possession was what led to Lund’s go-ahead three-ball.
“Michelle really did a nice job of getting the entry pass into the posts in that second half,” coach Paula Buscher said. “Our posts’ presence and our interior passing were much better in the second half, and I think that’s what made the difference.”
As both teams entered the double bonus, they again began to trade points, tying the score at 51, then 53 and eventually 55 on a jump shot by Loyola’s Jessica Hylton.
Bradley went up 59-55 after a few more fouls, but gave the ball back to Loyola after a pair of missed Harris free throws.
The Ramblers failed to take advantage of the situation, however, as they committed the game’s most costly turnover – a pass that slid right through the hands of Lisa Samplawski that sailed into the first row of the bleachers.
On the next possession, Bradley was able to get Johnson an open look from beyond the arc and she didn’t miss, knocking down what turned out to be the nail in the Rambler’s coffin.
The Braves were able to limit their mistakes, committing only eight turnovers in the second half, and capitalizing on Loyola’s errors, scoring 27 points off turnovers.
“The 22 turnovers in the first half was not characteristic of this team,” Buscher said. “I think a lot of it was that first-game jitters. I was just proud to see the resiliency of this group and how they came back after turning the ball over that much in the first half.”
More from SportsMore posts in Sports »