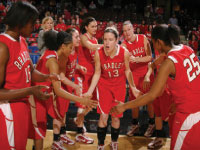 Bradley women’s head basketball coach Paula Buscher has high ambitions for the basketball program.
“Our goal is for this program to be on top,” Buscher said. “We want to be the best.”
For the first time in school history, the women’s basketball team made the postseason, competing in the inaugural Women’s Basketball Invitational.
The team played two road games beating Louisville 69-59 before losing to the College of Charleston, 76-66 to end their season.
“This was a huge accomplishment for this year’s team,” Buscher said. “It was a nice honor and it allowed the seniors to represent Bradley one more time and for the underclassmen to experience postseason basketball.”
The last two seasons have been two of the most successful in the program’s history. The Braves went 16-13 this season after winning a school record 21 games last year. It is the first time since the 1985-86 and 1986-87 seasons the program has had two winning seasons in a row.
Buscher said making the postseason for the first time is great for the program, community and players.
“The alumni and community are unbelievable to us and always want to see the program succeed,” Buscher said. “We receive letters and phone calls all the time and it really shows how much this community supports the team.”
Senior Jenny Van Kirk said seeing the program reach new heights is something she has strived for since arriving on campus.
“As a senior, it is a great feeling to help the program reach its first postseason ever,” she said. “Growing up, I was always taught to leave places better than you found them. Over the last four years, our program has really transformed into a contender. It is great to have been a part of it.”
Buscher said the team’s win over Louisville really showed what the players are capable of.
“Louisville is incredible on their home court, it was a big win,” she said. “One day in the future we will look back and say that was a great win.”
Van Kirk said making the postseason is great for the continued future success of the program.
“It is about providing a stepping-stone for the future of the program,” she said. “I am confident that the girls and the staff will continue to advance the program in the years to come.”
More from SportsMore posts in Sports »