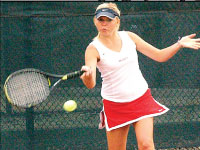 For the last time, three of Bradley’s athletes competed in front of their home crowd.
The women’s tennis team held its Senior Day for Emily Regenold, Jessica Buterbaugh and Kelly Donohue against Creighton.
“The three seniors on the team have been a pleasure to coach, not
just because of their tennis accomplishments,” coach Scott Peterson said. “These young ladies are outstanding individuals on and off the court. They have helpedtransform this program and pushed it to new heights. They have been outstanding role models and mentors to the underclassmen on the team.”
The Braves fell to the Bluejays 6-1 in the match. The team’s only win came at No. 5 singles.
Freshman Kennedy Scott won her match on the tiebreaker after she and her opponent split the first two sets.
Creighton won the other five matches at singles. Junior Nicole Miller came back after dropping her first set to win the second set and force a tiebreaker at No. 1 singles.  But her comeback attempt fell short.
Donohue battled to stay alive but was unable to capture the second set to elongate her match.
Both Regenold and Buterbaugh lost all of their sets by a score of 6-2 to wrap up their careers at home for the Braves.
“Playing the last home match made me feel like everything has come full circle,” Regenold said. “It really hits you that you’re leaving the program and just makes you want to try that much more for the last few times to leave it better than you found it.”
The Braves have two more matches on the road before the MVC Championships.
“We have been working incredibly hard and focusing on every point during practice and matches,” Peterson said. “All of the girls are walking on the court knowing that their teammates are going to give the same effort they are. These next two weekends are going to be tough, so all we can do is go compete for every point, every game, every set and every match.”
More from SportsMore posts in Sports »