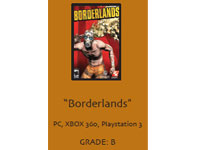 “Borderlands” is an action RPG made by Gearbox, who is probably most famous for porting “Halo” to the PC and “The Brothers In Arms” series. The game is available for PC, Xbox 360 and Playstation 3.

“Borderlands” is super addictive for the same reasons “Diablo II” was all those years ago. You play with your friends and shoot waves of enemies for no reason other than to get loot from them.

There are hundreds of different guns you can find in “Borderlands” that do different levels of damage or have the ability to electrocute, burn or even corrode someone.

For example, Brick has the ability to go berserk and simply punch your enemies to death. Lilith has the ability to pass into another dimension to teleport behind enemies, taking them by surprise. After acquiring these skills, you can make the ability stronger in a myriad of ways after leveling. For example, Roland’s turret can do more damage or even heal all of your allies.

“Borderlands” fancies itself as an RPS, or a Role Playing Shooter. And yes, you will be leveling up a character, finding different weapons with different effects, putting points in a skill tree, but overall the game is a shooter first. The combat is very good and all of the different weapons give you variety on how to slay your opponents. The choice to make the game more shooter-oriented than role-playing is one of the games major strengths.

The decision to cel-shade “Borderlands” might have been Gearbox Software’s best decision in this game’s development.

Cel-shading is an art style that makes the game heavily resemble a comic book. The colors are highly contrasted and everything is outlined in a thick black line. Without this style, the game would just look like a “Fallout 3” clone. The cel-shading gives this game personality and differentiates it from all of the other shooters out there.

It sounds pretty good … so why is it not a five star game? “Borderlands” is very fun playing co-op. A lot of the fun is leveling with your friends, sharing and hunting down loot, etc. By yourself, “Borderlands” is boring at times. It is only fun in spurts when played alone. With other people the game becomes awesome. There are a lot of little moments that happen in multiplayer that you do not get when playing the game alone.

Also, playing with people means harder enemies and better loot. My other major criticism is the plot, or lack there of. There is a plot, but it is throwaway. You often forget about it until a certain character in the game reminds you.

Do yourself a favor and pick up “Borderlands.” Just make sure you have friends to get the most out of this game.