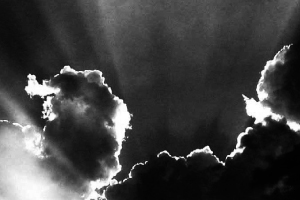 Bradley Theatre has an affinity for leaving audiences feeling different as they walk out the Hartmann Center doors than they did as they walked in.
Some leave with lingering chuckles, some with teary eyes and in the case of “Cloud 9,” some audience members scraped their jaws off the floor – and left before the show was over.
In the director’s notes, Doug Rosson admits he was “shocked to my very core” by the play’s content when he first saw Caryl Churchill’s play as an undergraduate student. Rosson said he hoped to shock the audience. To that effect, “Cloud 9” was a success.
The play begins in Africa in 1880 and the second act moves to London in 1980. The two acts have few characters in common and make the plot seem almost split. “Cloud 9” looks at gender, race and sexual issues without holding back.
The sexual scenes challenge the audience to face realities that aren’t put on stage often.
The actors say things that shouldn’t be said and do things that shouldn’t be done and that’s what makes “Cloud 9” so intriguing.
“I love ‘Cloud 9’ because it goes there. This play continuously pushes the envelope from beginning to end,” said Anne Marie Boyer, who plays young boy Edward in Act I and transitions into grown woman Victoria in
Act II. “Caryl Churchill is an extremely bold writer, and it is so exciting to have the opportunity to play these crazily bold actions on stage.”
Boyer is just one of the actors called upon to completely change gears and play two distinctive parts in the same play.
Eric Zuber plays British patriarch Clive in the first act, then portrays an adult Edward in the second act.
David Alan Jackson had the daunting task of donning high heels and a corset as Clive’s wife Betty in the first act and then playing Gerry, Edward’s male love interest in the second act.
The acting was versatile from all aspects as the entire cast played dual parts. Jeremy Behrens, Janice Gerlach, Sarah Duncan and David Vale all turned in good performances.
Vale’s depiction of African servant Joshua and Gerlach’s tri-character performance was among the most impressive.
“I thought the acting overall was superb. The whole cast contributed something to the acting experience,” junior advertising major Marlon Washington said.
Despite consistent acting, production, execution and scenery, the play’s prickly content literally scared some theatergoers right out the door, which speaks volumes about its impact. The sexual scenes are unexpected and overwhelming, but exciting at the same time.
“I can honestly say that I have never worked on a show with this much innuendo,” Zuber said.
From the uncomfortable laughter, deep gasps and bulbous eyeballs protruding from the faces of some in attendance, it’s safe to say it’s the most innuendo they’d ever seen in a show.
“Cloud 9” is very aware of its niche as a shocking look at gender, sex and race and their progress (or lack thereof) over a hundred years’ time.
It’s a show that’s not for everyone, as a certain thickness of skin is all but required.
“I really enjoy the scene in act one that involves Edward’s doll and a lot of smacking and crying. It really is great fun,” Jackson said.
If you’re willing to look past societal expectations, deny norms and expose yourself to things that aren’t really comfortable for anyone, venture to the Hartmann Center, pick up a $7 student ticket and see something provocative, funny and unique.
“‘Cloud 9’ was like a glass of sweet lemonade filled with 10 scorpions. It was a funny show, but, man, did it pack a sting,” said Washington, capturing the duality of one of the Theatre Department’s most daring plays yet.
More from VoiceMore posts in Voice »