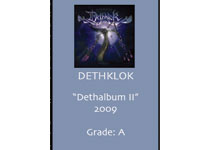 Dark, ominous tones are normally the sounds of doom and gloom, but Dethklok creator Brendan Small has used them to craft a comedy.
“Metalocalypse,” a show on the Cartoon Network’s Adult Swim, is based on a fictional metal band named Dethklok that is “100 times more popular than the Beatles,” according to Small.
The band has the ability to control how the world behaves and boasts the seventh largest economy on the globe.
For example, if the band doesn’t come out with an album in a while, people start committing suicide. Their fans just follow them around like drones.
At their concerts, thousands of people die just from being there. This ranges from a big box made of spikes being dropped in the wrong place (on top of the crowd) to a massive audience mauling by a box of beastly kittens.
The show’s basis is to make light of other bands and celebrities that have reality shows. The characters seem to be very disconnected with reality and have no idea how the rest of the world lives.
But just because this is just a show doesn’t mean Small stops there. He is also a musician and has released two albums using the Dethklok name to market and make music for the show.
The most recent Dethklok album, “Dethalbum II,” uses much of the same formula Small used when he created the show.
The opening tribal drums in “Bloodlines” lead way to singer Nathan Explosion’s low growl. The intertwining guitar seamlessly glues each verse together. The tribal drums segway to the end of the opening song and right into the rest of the album.
My personal favorite song is the third track, “Burn the Earth.” With the catchiest chorus on the album, “Burn the Earth” uses Explosion’s growl most effectively. This song uses stop-and-go guitar and vocals to lead perfectly into the first big guitar solo of the album.
The next song has one of my favorite song titles ever, “Laser Cannon Deth Sequence.” The song gets its title from the machine gunfire-like chorus and the laser sound effects throughout the song.
The eighth song on this disc has another interesting name, “I Tamper With The Evidence At The Murder Site Of Odin.”
The song is about someone who kills the Norse god, Odin, and is unstoppable until the end when his eventual capturer turns into a god as well.
One of the best intros on the album is in “Murmaider II: The Water God.” The slow, churning of the guitar and drums kick off the song at a march-like pace and lead up to an epic final minute of the song.
Dethklok’s second installment of the “Dethalbum” gives the listener a bevy of savage and heavy cuts that give the TV series the haunting look.
This CD arrives just in time for “Metalocalypse’s” third season, which will be the first to feature 30 minute episodes as opposed to the usual 15 in the first two seasons. Anyone who listens to any sort of heavy metal should definitely
More from VoiceMore posts in Voice »