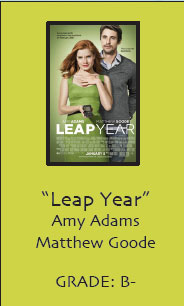 In real life, the dating scene oftentimes seems bleak. In Hollywood, however, love seems to be more ubiquitous than Ryan Seacrest is on television.

Most leading men and women consistently have at least two, sometimes even more, potential lovers in the course of one film.

Apparently, the key to finding true love is already having a significant other, followed by a series of unfortunate events.

“Leap Year” is one of those films, nothing more than a typical Hollywood-produced love story. It is not groundbreaking or fresh but not offensive or obnoxious either. It just is.

The always-adorable Amy Adams stars as Anna, a career focused 30-something with a stereotypically perfect doctor boyfriend (Adam Scott). Anna finds herself traveling to Ireland to surprise her boyfriend, taking matters into her own hands and proposing to him on Leap Day, an Irish tradition.

Obviously, nothing goes Anna’s way. Her plane emergency lands in Wales after a frightful storm, and she struggles to find a way to reach her boyfriend and properly prepare for her proposal. Following the plane fiasco, her boat to Ireland hits yet another storm, diverting her to the Dingle Peninsula.

The only one to help her, conveniently, is a broodingly attractive innkeeper named Declan (the lovely Matthew Goode). As the pair attempts to travel to Dublin, they encounter rain, losing a car, missing a train and more rain.

As predictable and cliched as “Leap Year” is, there are plenty of cute and charming moments that make the movie bearable, and Adams and Goode play well off each other.

Adams continues her string of likable characters, although this performance is certainly one of the weaker ones in her brief, yet storied career. Even when Anna is supposed to seem annoying and materialistic, it is hard to look past Adams’ charisma.

Goode combines the right amount of charm and cynicism to seem like a realistic guy. Though this role won’t boost him into superstardom, it certainly demonstrates his leading man potential.

The script, however, doesn’t do these talented actors justice. The backgrounds of Anna and Declan, what really makes them tick, are barely uncovered, and discrepancies within the script deter from an already unoriginal screenplay. For instance, how does a smart, educated woman like Anna not know plugs in Europe differ from America, a gag that was overused many years ago?

The gifted supporting cast is also left behind, given too brief of roles. John Lithgow, as Anna’s flighty father, is on the screen for only a few minutes, merely to provide Anna with the old Irish folklore that inspires her trip. Kaitlin Olson, as Anna’s onedimensional best friend, is hilariously outrageous on “It’s Always Sunny in Philadelphia” but is hardly given a chance to tell a joke, and Adam Scott, Anna’s boyfriend, could have used a little more sarcastic swagger like he brought to his dirty, callous character in “Step Brothers.”

Even while working with a weak script, director

Anand Tucker injects romance through beautiful shots of the Irish countryside, picturesque castles and emerald rolling hills. The sweet mix of classic and modern love songs easily charms, usually more so than the conversations between characters.

Though the cutesy dialogue often falls flat, “Leap Year” still has its moments, and if you are searching for a romantic, albeit conventional comedy, it might be able to curb love story cravings.