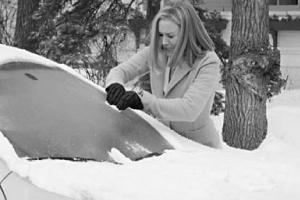 “New In Town,” directed by Jonas Elmer, is a standard, formulaic romantic comedy. Co-written by “Sweet Home Alabama” writer C. Jay Cox, “New In Town” is a must-see for chick-flick fans.
It all starts when Lucy Hill (Renee Zellweger), a rising star in her company, is sent to scenic Minnesota to become a plant manager and to eventually cut half of the jobs.
Once she arrives, it is instantly apparent she does not fit in.
After a rude first meeting with the union representative, Ted Mitchell (Harry Connick Jr.), her job becomes even more difficult.
In true chick-flick form, love grows between the harsh, cold boss and the sexy union rep.
Unfortunately, the more attached she becomes to this little town and the people in it, the more pressure comes from corporate to make the worker cuts. Spoiler alert – it all works out in the end.
The moral of the story is really to be confident in what you do, and follow your heart, because in the end it doesn’t matter who you work for. You need to do what works
for you.
Although the plot is contrite and familiar to anyone who is knowledgeable with romantic comedies, it is the little touches that make
“New in Town” entertaining and worth watching.

Renee Zellweger is perfectly cast as the driven career woman, Lucy Hill, as she shines both as the peppy girl in the office as well as in the snowbound Minnesota town.
Harry Connick Jr. also succeeds as the sometimes gruff man among men, and he is able to play off Zellweger pretty well.
Their eventual connection does seem believable and by the end, you can’t help but cheer them on.
The northern accents also bring a funny twist to the film, and
some of the comedic touches are worth seeing.
However, some of the jokes are a little bizarre, including a very awkward dinner scene and a strange snowsuit urination gag.
On the whole, the film is mainly just for fans of romantic comedies. There is nothing new or dynamic, but it is certainly familiar enough to please movie-goers.
Fans of the genre will definitely be pleased, but other movie goers will be less than impressed. But some may find it unique enough to warrant a viewing.
More from VoiceMore posts in Voice »