“The Blind Side” inspirational, about more than just football 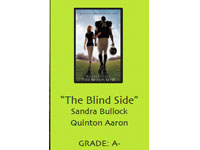 Imagine for just a moment what it would be like if your family was never around. Imagine going to school everyday where everyone stares at you like you’re a freak of nature. Imagine what it would be like to have nothing at all, not even a bed of your own.
This is the beginning to not only one of the best sports movies I’ve ever seen, but also one of the most heartwarming and compelling success stories of the year, “The Blind Side.”
The film revolves around the lonely and quiet Michael Oher (Quinton Aaron), a desperate young man who was taken away from his family when he was only a child because of his mother’s addiction to drugs.
From there, Michael grows into a person who is traumatized beyond belief, yet as the movie goes on it becomes clear that he is capable of overcoming these travesties with the help of a caring mother, Leigh Anne Tuohy (Sandra Bullock) and her husband (Tim McGraw).
As Michael is first accepted into the trim suburban mansion of the Tuohys, you can sense he feels like he has just stepped into another world where everything is neat and clean, and everyone is together as a family; something Michael has longed for his entire life.
Throughout his stay with this family, Michael transforms from a shy and hopeless individual to an inspirational young man who proves that even when things seem at their absolute worst, there is always that small light at the end of the tunnel for those who pursue it.
Although the film is about Michael’s progression into becoming a sensational left tackle, the storyline is more focused on the relationships he forms throughout the film.
These relationships are extremely crucial to the film’s premise, because without them it is clear Michael would still be on his own today without anyone to care for him. After being accepted with open arms into his new family, Michael makes countless strides in becoming an accomplished student, a caring family member and an extremely skilled football player.
Acting-wise, most of the characters do an adequate job of playing their roles. Bullock puts on a superb performance as the aggressive, yet caring mother who takes Michael in and motivates him to not only put the past behind him, but also to be successful at everything he does whether it be doing well in school or being a contributing member of football team.
Aaron puts on a magnificent performance as he captures Michael’s sadness and determination by simply the expressions on his face. They go a long way in showing the viewer the impressive development Michael went through to get where he is today.
Although this movie may be less about Michael’s success on the field as his relationships with the family who took care of him, it still manages to be compelling in its own way. Even if you’re not a fan of football, this film has a message so powerful and incredible that anyone will be able to enjoy it from beginning to end with tears of joy in their eyes and warm smiles on their faces.
More from VoiceMore posts in Voice »