“Where the Wild Things Are” Spike Jonze to Transform Childhood story 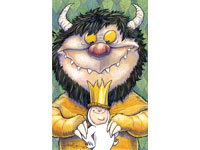 There seems to be no movie that has ever inspired this much seemingly-out-of-nowhere anticipation quite like “Where the Wild Things Are.”
Based on the universally beloved children’s book, early looks at “Where the Wild Things Are” have strummed up a huge fan response with its impressive visuals, breathtaking soundtrack and the draw of good old-fashioned nostalgia.
But, with this much hype, can the film ever live up to its expectations? There are a number of factors to consider to before walking into the theatre.
The Story
For those who don’t remember, or lived a truly deprived childhood “Where the Wild Things Are” tells the story of Max, a young boy who is sent to bed without any supper.
He either dreams or imagines himself entering the world of the wild things and becoming their king. He treats the wild things as he is treated at home, but finds himself lonely and hungry, so he returns home, where he finds his dinner.
The biggest problem with adapting “Where the Wild Things Are” for the screen is turning a 20-page book into a feature length film. The entire story is only 10 short sentences.
However, this is not an impossible task. There is enough emotion in the story that it would be simple to build onto Max’s character and expand the story. The only thing to worry about would be unnecessary padding and any sort of significant changes from the meaning of the treasured story.
Spike Jonze
Director Spike Jonze has been working directly or indirectly on “Where the Wild Things Are” since 2000, although the film has been shuffled around between studios and had to face problems in post-production as well as possibly having to re-shoot the entire film. Through it all Jonze’s distinct vision holds true.
Initially, Jonze did not seem like the right director for the job. His earlier films, “Being John Malkovich” and “Adaptation,” are both exceptional works dealing with the surreal, however, both were written by the extremely talented Charlie Kaufman, and neither feature the same sort of imagination that his earlier work required.
Nonetheless, Maurice Sendak, the author of the book, has helped produce the film and has said the movie is truly touching and it remains true to his creative visions.
The Visuals
What people remember the most from the book, “Where the Wild Things Are” are the vibrant illustrations of the wild things. The beasts were evocative without being frightening, but there was a sense of wonder to them that seemed perfect to children.
From trailers and early looks at the film, viewers will not be disappointed.
With a mix of puppetry, animation, and use of complex costumes and suits, the monsters and worlds of the wild things have been rendered in stunning detail and beauty.
More from VoiceMore posts in Voice »