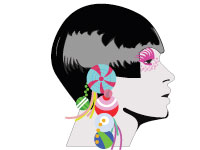 A revolution. One of the most unpopular wars in history. Authorities no one can seemingly trust. It seems 2008 is just another shallow echo of the flower-choked era of yesteryear, 1968.
Sure, one of them has the Beatles and the other has the Arctic Monkeys. Maybe there’s a slight difference between the peacenik hippies of before and the freak-folk fans of today. Perhaps there is even a difference between “Destroy All Monsters” and “Cloverfield.”
But this is all semantics. Take away the flower power, the millions of V.W. buses and the harmonica toting folk singers and replace them with apathy, green cars and whatever an iPod can shuffle up, and the exact same year is magically  brought back up.
Up for consideration, many of the events of this year are measured up against the milestones of 1968. The results are, at worst, groovy.
On “Laugh-In,” Richard Nixon said “Sock it to me,” in a desperate attempt to fit in with the pop culture.
Just this year, Mike Huckabee turned his campaign into a sort of bizarre Internet joke by declaring that Chuck Norris was one of his active supporters.
In an even stranger twist of politicians trying to fit in with those crazy kids, George W. Bush chest bumped his way into creating perhaps the most awkward Air Force Academy graduation photos ever.
Although the Beatles were close to combusting by 1968, they still managed to make an appearance in their animated movie “Yellow Submarine.” Certainly the band’s most whimsical film, “Yellow Submarine” featured a musical land under the sea that is slowly being drained of color.
While perhaps not the Beatles of today, this year marked the release of “Christmas on Mars,” a sci-fi Christmas story starring The Flaming Lips.
The King, Elvis Presley, returned to the stage on what has now been termed the “Comeback Special” on Dec. 3, 1968. Decked out in black leather, Presley was able to choose what songs to play and made a return to playing live shows, buoyed by the critical success of the concert.
Now in 2008, teen pop queen  Britney Spears returns to the limelight. Her single, “Womanizer,” debuted at No. 1 and by many accounts, she seems to finally be back in control of her life.
1968 spawned the butt of many a film buff’s joke,
“Barbarella.” The semi-pornographic sci-fi
film starring Jane Fonda is famous for its zero-gravity scenes as well as its tongue-in-cheek dialogue.
2008 was able to echo the campy sci-fi flick with “Zombie Strippers,” a straight to DVD B-Movie starring Jenna Jameson and Tito Ortiz. The film actually made it to No. 11 on the DVD charts. No word yet on certified camp classic status.
1968 also marked the tragic death of one of the great American writers, John Steinbeck. The Nobel Prize winner’s writings are required reading for many students and his place in literary history is secure.
In September 2008, the literary world was struck with tragedy by the suicide of David Foster Wallace. The author of “Infinite Jest” and “Consider the Lobster,” Wallace was certainly one of the great writers of the generation. His works spanned fiction as well as in-depth essays on the world.
Time Magazine even placed “Infinite Jest” on its list of the All Time 100 Greatest Novels.
One could contend time recycling itself is just a coincidence. One could say people can draw connections from pop culture however they see fit. This, however, is wrong.
Even the most ridiculous of pop culture floats back up to the top after enough time. Turn on the television, and anyone can see Twiggy-sized models gracing commercials, hear the same folk rock that Simon and Garfunkel started on “Bookends” and watch as every horror movie borrows a little something from “Night of the Living Dead.”
As America comes into a new era of culture and politics, everyone must look back at 1968 to see how much has changed and how much has stayed the same.
More from VoiceMore posts in Voice »