A Videogame Pile of Shame 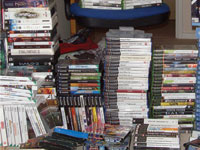 In a time before bi-monthly paychecks from Starbucks, getting the opportunity to play new video games was a rarity.
Without any real income, I would get to play maybe three or four new games a year, with most of these opportunities following my birthday or Christmas.
Because I wasn’t able to play every game that came out, I spent much more time with a smaller selection of titles. Therefore, I would devour those games and I would play through them multiple times, savoring the feelings.
Difficulty didn’t matter either. In fact, many times after beating a game the first time, I would replay it on the hardest setting, just for the challenge.
Now, however, with a steady job and a little extra money, I’m able to play many more games than I could when I was younger. And as such, it has drastically affected my gaming and purchasing habits.
With the opportunity to play more new games, I spend less time than with older, albeit still relatively new, games. This is a shame because sometimes games will sit on my shelf halfway completed and won’t be revisited.
This situation doesn’t just affect me, but gamers everywhere. This phenomenon of leaving games uncompleted and moving on to another runs rampant among gamers, so much so that it has even been given a name.
These games fall under the category of pile of shame.
My own pile of shame spans multiple consoles, stretching back as far as PlayStation 2 and continues through PlayStation 3 and Wii.
Every gamer has his or her own reasons for leaving games uncompleted and moving on.
For some, they reach an area that seems unsurpassable, and frustration forces them to give up. For others, myself included, staying current with video games is a lifestyle.
As a journalism major who aspires to cover the video game industry, spending so much time with just one game isn’t feasible anymore. To remain knowledgeable of the industry, I can’t devote myself to games the way I used to.
The only time I can play games in their entirety anymore is for reviewing purposes, as to not give a biased or unfounded opinion.
A few games in my pile of shame I would love to revisit include Valkyria Chronicles, Fallout 3 and Shadow of the Colossus. I’m currently playing BioShock 2 and God of War 3, however, and as of right now, there is no looking back.
More from VoiceMore posts in Voice »