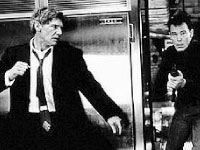 Cinematic examples for our new president

2008 has certainly become a year for the history books with Barack Obama winning the title of President-elect, but celluloid has certainly trumped reality in terms of racial equality for the highest office in the nation. While Hollywood has fortunately never equated presidential ability with skin color – even though it was James Earl Jones, Darth Vader himself, who first broke down these movie barriers in the 1972 film, “The Man” – the industry obviously has a clear vision of what it takes to be Commander-in-Chief.
Looking at the last two years, hope and change is what’s currently on the agenda for Tinsel Town, and although Obama has blatantly based his campaign around these inspiring nouns, he has yet to deliver. However, if the decisiveness of future black presidents lays with the fictional leadership of Morgan Freeman in “Deep Impact,” Obama will be more than capable.
When he isn’t driving Miss Daisy, Freeman’s President Tom Beck has to deal with some pretty dire celestial consequences which flashy director Michael Bay couldn’t even conceive of in “Armageddon.” While the Bruce Willis vehicle found tax evasion and cheesy acting of greater importance than the survival of the human race from a killer rock, Freeman’s flick handled the same dire situation with all the elegance expected of the veteran actor.
Besides, if Mother Nature really decided to push the reset button on civilization, Obama should kick Al Gore and his Prius to the curb and instead take a practical page out of Beck’s book. When a giant comet is the primary threat against democracy, we’ll see the president’s to-do list transform from hope for social security and a change in health care to a hope for survival and change in trajectory.
And if Earth isn’t burnt to a crisp in the end, we’d be willing to forget the whole Draconian lottery system and fiasco with the Eastern seaboard. We didn’t need the Ivy Leagues anyway.
Then again, no matter how much charm and polish Obama may bring to the table, no one brings as much crass class as “Idiocracy’s” President Dwayne Elizondo Mountain Dew Herbert Camacho, cluelessly portrayed by former NFL player Terry Crews.
Although Americans aren’t the brightest lot in 2505 – the nation’s favorite television show is “Ow, My Balls!” – with a Commander-in-Chief whose first-class credentials include pro wrestler and porn star we shouldn’t have too much to worry about. After all, he’s traded out Air Force One for a fuel-efficient Orange County approved chopper and actually gets Congress in gear with semi-automatic weapons. Don’t forget he’s also found the solution to all the world’s problems – electrolytes.
Still, if a bit of intellectual depth and the ability to quickly dispose of terrorists with panache is key, Harrison-get-off-my-plane-Ford in “Air Force One” easily fits the bill. While I’m sure being able to fend off armed and angry Russians isn’t a requirement for the position, it certainly wouldn’t hurt in the reelection process.
And if he can handle economic policy the same way he deals with poorly accented baddies, we’ll be out of this crisis before Gary Oldman can say “da.”
But while Ford can clearly handle a bunch of gun-toting rebels, his foreign policy still doesn’t have a contingency plan for a hostile alien invasion. Cue Teddy Roosevelt wannabe Bill Pullman as the high-flying Thomas J. Whitmore in “Independence Day.”
Currently the most relatable cinematic Commander-in-Chief  – our alien overlords dealt the man a serious blow by foreclosing on his house – President Whitmore has deftly outshone most of his previous peers by having “Savior of the World” added onto his resume.
Unfortunately, the same can’t be said for Jack Nicholson’s presidential turn as James Dale in “Mars Attacks!” A big fan of Rodney King, the president foolishly followed the advice of his softhearted advisors, ultimately leaving James Bond as a dismembered head and “Sex and the City’s” Carrie Bradshaw as Paris Hilton’s newest chihuahua. Who knew Dick Cheney’s “shoot now, ask questions later” policy would come in handy?
Obviously, the executive office should always take care in taking any cues from the United States of Hollywood. America wants an Andrew Shepherd from “The American President,” not a Merkin Muffley from “Dr. Strangelove.”
Then again, with global warming, a nuclear winter might not be so bad.
More from VoiceMore posts in Voice »