Adams masters the science of “Cardinology” 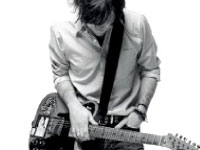 Drug addiction. Rehab. A breakup with a pop star.
Amid all of these problems, Ryan Adams managed to find time to create a record that transcends any issues he had and raises him, yet again, to the top of the alternative scene.
“Cardinology,” an album Adams recorded with his side project, Ryan Adams and the Cardinals, encompasses many genres, engaging the listener in a smoothly run rollercoaster of emotions, sounds and rhythms.
Fans of the Cardinals, or the usually solo Adams, have no need to worry. While its country influences are less prominent than the 2005 release, “Jacksonville City Nights,” the similarities between the band’s first effort “Cold Roses” and “Cardinology” are refreshing, as reinvention was not a necessary step.
“Cardinology” tells many stories, ones of heartbreak, love and addiction. While these themes are nothing new to music, Adams and the Cardinals handle each with a fresh perspective.
The album begins with the perfect meld of alt-rock and country in “Born Into A Light” and sets the mood for the rest of it, though the preachy lyrics, “For everything that’s wrong there is a worried man / There is a reason why / We just don’t understand but will, you got to keep the faith,” can become overpowered by the melodies in the background.
One of the highlights of “Cardinology” is the Bono-sounding “Fix It,” where Adams’ breakup with the aforementioned pop singer-turned-actress Mandy Moore can be felt: “But it feels like losing when someone you love throws you away.”
The influence heartbreak has on Adams flows throughout the album, with such painful lyrics as, “Funny how my mind counts each day / By the times I thought of you” on “Go Easy,” an ode to heartbreak and all that ensues.
The pain hits its peak with the back-to-back songs “Crossed-Out Name” where he laments with a strong, yet serene acoustic guitar, “When I close my eyes / I feel like a page with a crossed-out name,” and “Natural Ghost,” which opens with a line that finds Adams comparing his feelings to “waiting around for somebody to die.”
“Cardinology” doesn’t stay depressing for the whole album, however, and some songs feel as if they could be written by Moore herself, filled with sugary cliches such as “what goes around, comes around.”
Adams’ piercing vocals and the Cardinals’ harmonious backings make tired truisms sound imaginative, as in the R&B, up-tempo “Magick” and the nautical-inspired “Sink Ships.”
Mentioning Ryan Adams without country is almost a crime, and he doesn’t forget where his roots are, as an alt-country rocker, reconciling a twang sound with a rock ambition, especially in “Evergreen” and “Let Us Down Easy.”
While many of the lyrics are poignant, some just get lost within the rhythms that fill the songs as if Adams spent more time dealing with the presentation than the actual words.
“Stop” is an exception to this. The slow, stripped-down piano intertwines harmoniously with Adams’ vulnerable voice, soothing the listener while transferring Adams’ pain to anyone who comes in contact with the song. Lyrics such as, “Oh one day when you’re looking back / You were young and man you were sad / When you’re young you get sad, then you get high” sting the soul and hearken back to Adams’s hungry days.
While “Cardinology” might be missing progressive or innovative sounds, the Cardinals have found a comfortable niche in the music world. Adams, after more than 10 years in the industry, leaves listeners lingering for more and confident that whatever is ahead will be good, even if he doesn’t date a pop star along the way.
Ryan Adams
“Cardinology”
Losg Highway, 2008
Grade: B+
More from VoiceMore posts in Voice »