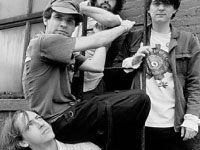 Traditionally, the band’s music has been airy experimental rock, filled with auto-harp as well as guitars that just do not seem quite normal.
On albums like “Here Comes the Indian” and “Holinndagain,” the members of Animal Collective have made a name for themselves by creating music that blends ’60s psychedelic jams with alternative folk to create a bizarre but thoroughly enjoyable experience.
However, on “Merriweather Post Pavilion,” Animal Collective changes it up.
From the first track, the exceptional “In the Flowers,” an almost orchestral sound washes over listeners. The style is more akin to something released by the Arcade Fire, but it is definitely a welcome addition to the album.
“Merriweather Post Pavilion” picks up again on “My Girls,” the first single. The lyrics sung by Panda Bear (real name, Noah Lennox) are vintage Animal Collective, and the same rhythmic, circular song structure is still present, but the choice of big-band bravado is what sets the song apart from much of the back catalogue.
It would be easy to argue “Merriweather Post Pavilion” is the sound of Animal Collective escaping from the shadow of its modern jam band past.
Every single song seems to be filled with the kind of production that would be considerably easier in the studio and much less organic when reproduced on stage.
The album continues in this way throughout.
There is no true low point, as much of the record flows smoothly from track to track. On the final song, “Brother Sport,” the group finishes with a bang, reveling in all of the facets of its newest musical fascination.
On the whole, the record is extremely dense, and like every Animal Collective album, it is best experienced when it can be focused on.
The circular nature may seem to make it suited for atmospheric music, but more careful listeners will find many of the more peculiar beauties of the work.
Panda Bear shines through in “Merriweather Post Pavilion.”
He channels Brian Wilson circa “Pet Sounds” throughout much of the record, and sounds just as at home in front of brass as he did with the more melodic work on earlier Animal Collective releases as well as on his own solo album.
“Merriweather Post Pavilion” offers the average listener a fantastic album, filled with brand new sounds that give depth to the already broad genre of indie experimental rock.
For those who wish to analyze the newest Animal Collective genius document, the album offers plenty of exciting moments.
One can locate holdovers from Panda Bear’s “Person Pitch” as well as some of the song structures that made “Sung Tongs” such a triumph.
It cannot be argued the new album is the sound of Animal Collective moving forward, although they are sure not to remain in this area for long. They have never been a band to stay in one style or beat a single idea to death.
Only the most cynical of old fans will be disappointed by its newest shift, and “Merriweather Post Pavilion” would certainly be a great entry point for someone that is curious about the band.
Regardless, the album is a triumph that is certain to be one of the albums to beat in 2009.
More from VoiceMore posts in Voice »