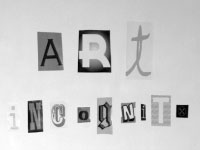 “Number six, we’re looking for number six!” yells a voice from a crowded glass table. A very eager man responds to the call as he approaches the table.
Anonymous number-calling, accompanied with laughter, casual talk and indie music were among the many sounds that filled the Heuser Art Gallery last Friday for “Art: Incognito,” an anonymous art show that ends tonight.
These sounds reflect a casual, everyday art gallery opening, but this was no ordinary exhibition.
Besides the free cheese and crackers, there is a twist to the “Art: Incognito” show. While observing the 42 diverse works of the exhibit, I noticed none of the artists’ names are revealed.
Instead, each art piece is labeled with a code made up of letters and numbers, which is strange for an auction of work done by young artists looking for recognition.
“A lot of people go to shows based on the artist,” said Claire LaRose, senior art education and studio art major and co-director of the show.
Fellow co-director senior Sarah Rebholz said anonymity allows the viewers to focus on the art.
“We wanted people to see the art not just the artist,” she said. “That’s [why the artist] is anonymous.”
The artists are undergraduate and graduate students who donated their work to the Spectrum Art Club.
As leaders of the club, Rebholz and LaRose collected the artwork during Winter Break and organized the exhibit.
“[The exhibit] was completely self-directed with our spectrum club,” Rebholz said.
All art was sold for the recession-friendly price of $20. Once the art was purchased, a picture of a Charlie Chaplin look-a-like with the name of the artist printed on it replaced the display.
Buyers could choose a variety of artworks from the exhibit which included pottery, paintings, photographs, mixed media and personal creations.
One of my favorites was a charcoal drawing of several round shapes. The close detailing attributed to the shapes, along with the specific shadowing made it look very realistic. Though I may not know who the artist was, I do know they are very skilled in the art of drawing.
Freshman studio art major Audrey Schlofner created a particular piece that caught my attention. She donated her 3D natural scene painting to the exhibit. By using tissue paper, glitter and an actual feather she found, she created a very original work.
“My piece had a lot of elements to make it unique,” Schlofner said. “I feel art is a unique reflection of the artist. I like to look at things around me and recreate them by making my own perspective on the subject at hand.”
Rebholz said she was happy with the attendance of the event.
“There were so many places people could have been but they decided to be here,” she said. “Even one of my pieces was sold.”
LaRose said it was important for the public to recognize the students’ talent and hard work.
“One of my goals was to get the public’s attention and bring them into the gallery,” she said. “The students who donated their work need their support.”
And support is what they got – of the 42 art pieces, 19 were sold last Friday.
“All proceeds will benefit the Spectrum Art Club and the artist,” LaRose said.
More from VoiceMore posts in Voice »