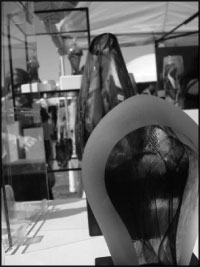 “The artist does not draw what he sees but what he must make others see.”
– Edgar Degas, French painter and printmaker
Fortunately for Peorians, they got to see a lot more than a flooded Riverfront this past weekend.
The high waters receded to the Illinois River recently, admittedly leaving some mud and gunk in its wake, but also clearing a path for Peoria’s 46th annual Fine Arts Fair.
Though anyone attending the Fine Arts Fair was immediately bombarded with the Peoria Art Guild’s merchandise tables upon entering, the crass commercialism soon gave way to a plethora of tents containing wildly diverse artworks as artistically pure and as fresh as they come.
“Oh, this is awesome!” junior art major Lauren Wenk exclaimed as she walked out into the mass of bright tents – a high compliment coming from someone who’s been to nearly 20 of these things.
The sunny day after the first presidential debate saw the proud display of more than a few “OBAMA ’08” shirts. And while there were as many John McCain shirts at the fair as there were giraffes, the event appealed to more than the stereotypical liberal-minded art enthusiasts. There were trendy urbanites, average Joes and all types in between.
With 151 booths featuring everything from pottery to paintings to photography, the fair beckoned to be explored in detail, even if one doesn’t know the difference between a Degas and a Dürer.
The price range was clearly aimed at serious collectors, although small replicas were almost always $20 each. Few paintings, sculptures or photos ran for less than $200, and multiple pieces went into the thousands.
The most expensive item seen was an $11,500 wall hanging made out of fibrous material and, according to the artist, represented how “humans are creatures of being who come from the sea and are made to dance.”
Back on planet Earth, I needed food like Van Gogh needed a bandage. Art is supposed to make the viewer contemplate, and enough artistic analysis can lead to a growling stomach. Though food options were limited, I did get a fantastic slice of pizza from the Nick and Willy’s booth. The Aegean pizza with its mix of olive oil, garlic, feta cheese and oregano was unbelievable.
The only time the gathering echoed a state fair was when it came to beverages. Beer was available, but at $4 for a small plastic cup, it was better to stick with straight water. It’s the smallest of complaints, and wouldn’t hamper my recommendation that anyone with functioning eyeballs attend next year. The day was as hot as the fair was massive, and besides, no one needs alcohol to enjoy what this fair had to offer.
Degas was dead-on in that opening quote, as hardly anything at the Fine Arts Fair appeared to be something a person would see in their daily life. These thousands of creations seemed nothing short of otherworldly. Some were ghastly, some were gorgeous, but it was all light years away from the mundane. Even photography from Italy and Ireland presented already-beautiful villages and fields in a removed, pristine manner far more striking than anything our dull lives have to offer – and it had an effect on at least two patrons that Saturday. Wenk commented on separate occasions how she wished she could paint better and travel farther.
C.T. Whiteworth, a portly man with square glasses and a grey soul patch, showed off his canon of bronze sculptures. Every participant at the fair displayed an artist statement to give patrons a crash course in their mentality behind the art. Whiteworth chose simple forms to give the bronze itself a chance to be seen without distractions. His works aren’t complex, but they are still unique and remarkable because of the material’s versatility.
“I can tarnish it into different colors,” Whiteworth said. “I like bronze for many reasons, mainly because it’s here forever.”
The standout artist of the day was Steve Nowatzki, who drew the personal favorite, “The Eleventh Hour.” The vivid drawing recalled the grim nature of early 20th century propaganda, with a canary wearing a gas mask inside a birdcage shaped like the Earth and colored with the shapes of familiar continents. The cage rested on a chess board to represent the game of chance we play with our “exploitation of environment,” as he said on his Web site.
Nowatzki is rarely as overt in depicting environmental issues as he is in that piece, so those who prefer to keep art and politics separate would still find much to revel in with his stark, stripped-down work.
Workers at the fair said Bradley graduates come back to Peoria just for the art fair, and after just a couple hours of immersion in the sea of creativity, I know I’ll have a full tank of gas ready for next year’s fair.
More from VoiceMore posts in Voice »