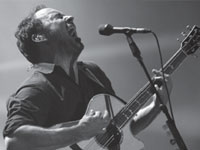 PBS is home to shows such as “Lap Quilting with Georgia Bonesteel,” “Masterpiece Mystery!” and “Antiques Roadshow,” among many others. Though Georgia Bonesteel probably fashions an excellent quilt, needless to say, I’m not tuned in to PBS a whole lot.
Except on Saturday nights.
“Austin City Limits,” a one-hour live musical performance show, has been on PBS since 1975 and has featured acts from a wide range of genres. Though it is filmed indoors, in a small University of Texas studio, “Austin City Limits” is known for its beautiful stage backdrop, which shows a clear nighttime Austin sky and a view of the Texas capitol building.
The pilot episode of “Austin City Limits” featured Willie Nelson, and the show has since staged performances by Elvis Costello, the Flaming Lips, Stevie Ray Vaughan, Robert Plant, Wilco, B.B. King, Phish, Coldplay, John Fogerty and Ray Charles, to name just a few.
The 35th season began Saturday with a performance by Dave Matthews Band, and as is customary, the lineup this season is truly incredible.
“Austin City Limits” is the longest running musical series in the history of television, and it gained even more historical acclaim last week with an official designation into the Rock & Roll Hall of Fame. The University of Texas studio was the 10th historic rock ’n’ roll landmark inducted into the Hall of Fame’s Landmark Series, which consists of a set of historic sites that each had a part in the telling of rock ’n’ roll’s extraordinary story.
A few of the places ACL joins include the Whisky-a- Go-Go in Los Angeles, King Records in Cincinnati and The Crossroads in Clarksdale, Miss., the point where highway 49 crosses 61, the “Blues Highway,” connecting New Orleans and Chicago.
Not only has ACL become a requisite viewing for any live music fan, it has branched out and produced a three-day festival in Austin’s Zilker Park, held every year since 2002.
Rivaling festivals such as Lollapalooza and Bonnaroo, the ACL Music Festival features more than 130 bands on eight stages. The 2009 festival was last weekend and brought together musicians including the Avett Brothers, Them Crooked Vultures, Andrew Bird, Robyn Hitchcock and the Venus 3, Grizzly Bear, John Legend and Kings of Leon.
Clearly, ACL’s mark on the music world is quite significant. The show’s unedited performances are authentic and showcase each performer’s genuine, raw talent. ACL has made the human experience of live music uniquely accessible, getting viewers as close to their favorite musicians as they are to their TV sets. Just about any fan of music can find an ACL performance by someone they love.
I bet even Georgia Bonesteel watches ACL while she’s quilting.
More from VoiceMore posts in Voice »