Bands You Should Know: Ace Enders 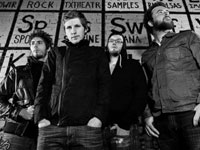 Richard Reins is a pop-punk conquistador. He and his sister Stefanie established independent powerhouse label Drive-Thru Records in 1996 and went on to discover some of the most influential pop-punk bands around, including New Found Glory, Midtown, The Starting Line and Dashboard Confessional.
In 2001, Reines met with New Jersey’s The Early November, headed by 19-year-old Ace Enders. The Early November produced two albums and three EPs between 2001 and the band’s hiatus in 2007.
Since the hiatus, TEN’s former members have pursued new projects as well as various side projects. TEN’s final album, “The Mother, The Mechanic, and the Path” (2006) dealt a lot with the financial aspects of fame in a transcendental way through songs like “Money in His Hand.”
One of the reasons for TEN’s hiatus was the rest of the band wasn’t interested in criticizing the music industry in song, so when Enders could work as a solo artist, he approached more mature themes.
His first solo EP, “The Secret Wars” (2008) featured songs about world peace, the music industry and his wife Jenn. This past March, Enders released a full-length solo album titled “When I Hit the Ground” on Vagrant Records. Both records have Enders’ signature, timeless voice that took him from singing about his girlfriend to singing about his wife.
His solo work sounds like The Early November mixed with Jack’s Mannequin, which would make sense, as Jack’s Mannequin frontman Andrew McMahon got his start with Something Corporate on Drive-Thru Records.
Ace Enders will perform at 9 p.m. on Oct. 17 in Lydia’s Lounge. His setlist will likely consist of tracks from both solo records as well as side project I Can Make a Mess Like Nobody’s Business and The Early November.
More from VoiceMore posts in Voice »