Battle of the brunches: Voice stacks up the weekend food options 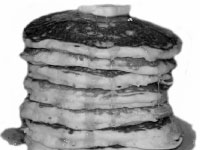 The weekend has finally arrived.
Students are churning out snore after snore as they catch up on sleep. Peeking in through the windows are the rays of the sun telling everybody it’s morning.
With these weekend mornings of relaxation come the best meals on campus – brunch in the dorms.
These breakfast buffets in Williams Hall and Geisert Hall are offered on Saturday and Sunday, respectively.
Brunch in Williams starts at 9 a.m. and ends at 1 p.m. for all those refusing to wake up in the morning.
Geisert’s plentiful buffet starts an hour later but ends at 1:30 p.m. for the stragglers.
The price for students with meal plans is equal to a dinner during the week. For those without a meal plan, be prepared to whip out a Lincoln and fifty cents to take on the behemoth buffets.
At the entrance of the newly renovated Williams cafeteria was a student to greet people and swipe student IDs. He told most people to enjoy their meals and continued to read his book.
In the Geisert cafeteria, I was greeted by another student. Not two steps after walking past her I was greeted by Dennis, one of the cooks, with sheer excitement.
It was nice to know even though I don’t live on campus anymore and haven’t been in the cafeteria since last semester, he still remembered me, and more importantly, was excited to see me.
However, Williams’ service throughout the meal could be described as perfectly invisible. This isn’t a bad thing because there weren’t any long periods waiting for food to come out nor were there a huge amount of trays and dishes piled up. Employees made their appearances throughout and were efficient in their work.
Upon arriving at Geisert’s buffet line, the hash browns were fresh out. But before I could even scoop out my eggs, another employee was filling the hash browns.
Both cafeterias have undergone changes in the past two years. Out are the dull whites and pastels and in are Bradley-themed colors. Both rooms have flat screen TVs with the day’s sports playing. William’s also features old schedules for the basketball teams and photos of players.
Geisert also has the tall tops for people who like to dangle their feet while they eat.
Williams separates its food into three islands, a significant change from before. The menu, available online at www.bradley.edu/foodservice/williams.html, featured scrambled eggs, doughnuts, hard boiled eggs, pasta with red sauce, cinnamon rolls, sausage and the salad bar. The site featured more food items but they weren’t to be found.
Most impressive was the sausage. It was perfectly cooked, and it’s always a plus when it doesn’t look like the most unhealthy thing in the world. It still had a light grey tone to it instead of being charred or darkened.
In the salad bar was chicken noodle soup. The soup would be greatly supported by Chunky’s because it had a lot of chicken and noodles. Each spoonful was full of the two and barely left room for the broth to climb onto the spoon. The only problem was it was a bit on the salty side.
One of Williams’ stronger points has always been the coffee. It’s never too hot, so people don’t have to wait a couple minutes before drinking. It gives people a nice kick to start their day.
Geisert’s brunch menu is magnificent. The standard eggs and sausage are there, but there’s also  French toast, blueberry pancakes, regular pancakes, barbeque pork chops and pasta.
Also, for those willing to venture to the back of the cafeteria is a waffle maker. I strongly encourage people to walk that further distance and make themselves a waffle. It’s well worth the wait for those light and fluffy masterpieces. Right next to it is the ice cream bin. Put a scoop of chocolate on the waffle for a delicious morning dessert.
The best part of this brunch is next to the widescreen TV. Five skillets are set up for the two-handed Vivienne. She makes omelets to everyone’s specifications and never forgets who had what.
These omelets are not skimpy either. They fill up half the plate and stand above the rims. Do me a favor and get the works sometime. In every bite is a new taste with wonderful flavor and texture. There are moist tomatoes, crunchy green peppers, delicious onions, mushrooms, diced ham straight from the Easter cookbook and the common favorite, cheese.
As Vivienne was finishing up this wonderful concoction, she offered something unheard of to me. She offered to put American cheese slices on top of the omelet. Without hesitation I accepted, and she threw on three slices and covered it with another skillet to melt the cheese.
Diving into that concoction could make anyone’s day. With two different cheeses oozing onto my plate, the omelet looked like heaven. It was almost too beautiful to eat, but this dish wasn’t meant for the sense of sight. Taste was the reward here.
Don’t be afraid to stumble on down to the cafeterias those mornings when your bed just seems impossible to get out of. The food offered at these cafeterias is well worth crawling to while wearing pajamas.
The verdict: Dennis and the Geisert crew take the cake … or pancake, rather.
More from VoiceMore posts in Voice »